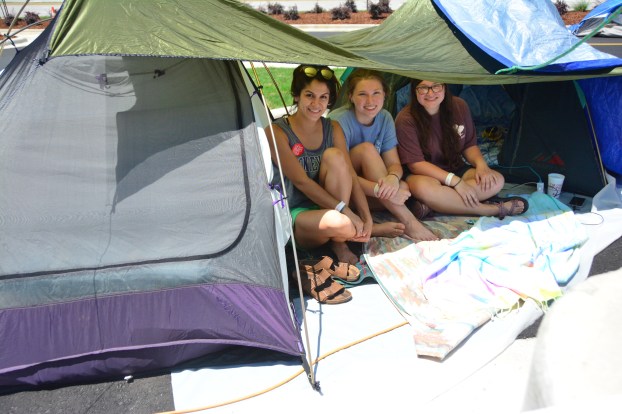 Friends Alyssa Green, Katie Compton and Christine Compton hang out inside of their tent set up in the parking lot of Chick-Fil-A on Wednesday, June 28. The friends received a one-year supply of free Chick-Fil-A meals for being among the first 100 people in line on opening day, Thursday, June 29. (Reporter photo/Briana Harris)

CALERA – By 2 p.m. on Wednesday, June 28 – a day before the restaurant opened – about 50 people had made their way to the parking lot of Chick-Fil-A to be among the first 100 people in line on opening day.

The nearly 5,000 square foot store, owned by Brad Johnson, is Calera’s first and only Chick-Fil-A. It sits at 64 Shelby County 304, across the street from Milo’s and in front of Zaxby’s.

The store seats 129 people inside, 24 people outside and includes a two-story play area for children.

Friends Alyssa Green, of Montevallo, Katie Compton and Christine Compton, both of Helena, arrived at Chick-Fil-A at 5:30 a.m. on June 28, set up their tents and settled in for their overnight stay with books, magazines, granola bars and water.

This is the first time the friends have participated in a Chick-Fil-A camp out.

“We like to camp and we like Chick-Fil-A, so we thought camping out for Chick-Fil-A was a good idea,” Green said.

Camper Kate Sewell, of Homewood, said the Calera opening marked the fifth or sixth time she’s participated in a grand opening camp out and received free Chick-Fil-A for a year.

Sewell was joined by her friends, Jessica Rost, of Homewood, and Jackie Howell, of Helena. The group arrived at the restaurant around 5:45 a.m. on June 28. Howell, who has never participated in a camp out before, brought her two sons – Jaxson and Jacob – along with her.

“It’s fun for the kids and it’s something they’ve never done before,” Howell said.

“It’s a fun event for the community and it makes you appreciate Chick-Fil-A even more,” added Rost, who has been one of the first 100 twice before.

Those who decide to camp out are not allowed to leave the Chick-Fil-A parking lot. Luckily, the fast food chain supplies campers with free breakfast, lunch and dinner, and an endless supply of free tea, coffee and water to make their overnight stay easier.

Chick-Fil-A also had games, like cornhole and four squares, set up outside for the campers’ enjoyment. Prizes were also given out over the course of the camp out.

Aside from the camp out, the grand opening included a children’s book drive for the local Boys and Girls Club and a food donation of 10,000 meals for Feeding Children Everywhere, a nonprofit that was formed in the wake of the 2010 earthquake in Haiti, and has since mobilized thousands of volunteers to assemble healthy meals for hungry people in 49 countries around the world.

The store is open Monday through Saturday from 6 a.m. to 10 p.m.

CHELSEA – A Chelsea Fire and Rescue firefighter was rushed to a nearby hospital after he suffered a “medical event”... read more