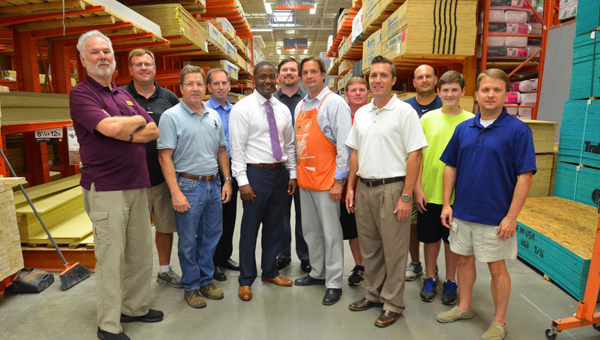 This year’s event, scheduled for Saturday, July 29, will for the first time include work at the city’s two high schools, according to organizer Derrick Murphy, who is also a member of the Hoover City Council.

Murphy started the Hoover City Dad Brigade as a way to “unify and provide an opportunity for dads.”

“As a dad myself, you like to be engaged in your children’s life,” Murphy said. “You had some schools who may have had dad organizations, but the goal was, ‘How can we unify our entire community and have dads active in every school?’ Studies show moms are usually more involved in their child’s education, but anytime you create opportunities, people show up.”

One July 29, an expected 600-700 fathers, grandfathers, mentors and other community members will spread out across Hoover City Schools’ 16 campuses and perform needed work—mostly manual labor such as landscaping and painting.

Murphy said he figured teachers were already on their respective campuses during the summer preparing classrooms for the upcoming school year, so he thought it would be a good time for dads to lend a hand.

The event also provides an opportunity for participants to network with each other, teachers and administrators.

Two “project leads” are identified for each school, and they work with the school administration ahead of time to compile a list of needs.

The list is used to ensure all necessary materials are delivered to the school prior to the clean-up day.

High school athletes and band members have been among the participants.

Workers will meet at Home Depot near the Riverchase Galleria at 6:45 a.m. on July 29 for a kickoff that includes a prayer, Pledge of Allegiance, going over rules and free breakfast supplied by Chick-fil-A.

Then the dads will travel to their schools to begin working by about 7:30 a.m.

Other sponsors include Zaxby’s, which provides lunch; Alabama Rental; Gresham, Smith and Partners; and the Hoover City Schools Foundation.

Registration ensures enough food is available for the volunteers, but no one wanting to pitch in will be turned away, even if they did not register, Murphy said.

Murphy said he is thankful for the level of involvement from fathers of HCS students.

“The more involved parents are, the better the students perform,” Murphy said.

By BRIANA HARRIS / Staff Writer PELHAM – A Birmingham man is being held in the Shelby County Jail after the... read more