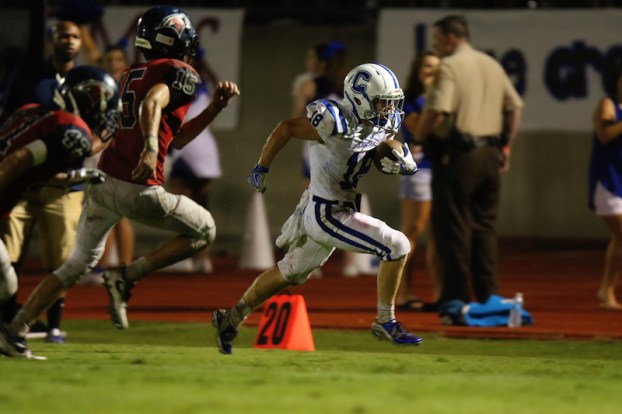 CHELSEA – With the football season at a mere grasp away and school starting back soon, several schools are taking advantage of the last full month of summer by hosting sport camps.

Chelsea High School will be no different as the Hornets’ football squad hosts their annual football camp from July 24-25, but Chelsea will be doing things a little bit differently than most camps around the area.

Elmore and Peters have formed a solid relationship after the Hornets’ head coach had Peters out to the high school during the spring for a coaching clinic on how to incorporate a safer style of play for his team.

“I had heard Scott speak at a couple of different coaches clinics and both times I heard him there were a lot of different things that made sense because he kept talking about how to take the head out of the game,” Elmore said in an interview back in January. “He said several times that he wished he would’ve known this stuff while he was younger because it would have saved him a lot of wear and tear on his body.”

A big reason Elmore is doing his camp this way is to make sure younger athletes and their parents aren’t scared to get involved in the game of football. In talking with him several times on the matter, Elmore has said every time that he knows parents are shying away from letting their kids play football and unless there is an initiative taken to make parents feel more comfortable, the game is going to diminish.

On the first day of camp, kids will learn proper techniques on tackling and how to be safe while playing the physical game. Learning it now at a young age is something Peters and Elmore both know will help them stay healthy longer instead of getting stuck doing the wrong techniques.

“Coach Elmore is taking a big time initiative and those are the kinds of coaches that are the future of football because they care about their players and want their kids to go on to do big things in life,” Peters said. “They step up and say ‘We care about our kids’ and don’t just try to get by with the physical attributes their team has.”

The Chelsea coaching staff will take over on day two of the camp and teach kids several different fundamentals and aspects of football, while also having some fun. Chelsea varsity players will also help out during both days of the camp.

Third grade and under campers will take part in the event from 6-7:30 p.m. each night, while fourth-sixth graders will take to the field just after from 7:30-9 p.m. both nights.

The camp will be free to kids that are registered to play CYC football as they are already pre-registered for the event in an effort to grow the youth league, while all others attending will pay a fee of $75.

If you would like to register or request more info, you can email coach Elmore at celmore@shelbyed.org.

By ALEC ETHEREDGE | Sports Editor PRATTVILLE – For the second time in a span of three days, the Thompson... read more