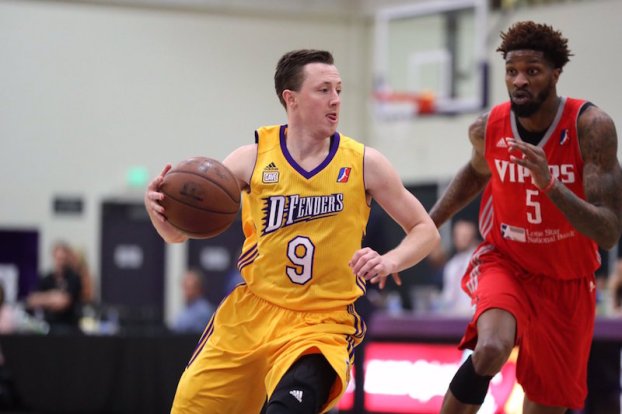 Former Spain Park star Josh Magette has reportedly signed a two-way contract with the Atlanta Hawks for the 2017-18 season and has the chance to play multiple games in the NBA this season. (Contributed/South Bay Lakers)

Reports broke late Thursday night, June 29, that former Spain Park sharp shooter and point guard Josh Magette had come to terms on a contract with the Atlanta Hawks for the 2017-18 NBA  season.

Magette was all set to join the Hawks and Indiana Pacers in Las Vegas and Orlando for summer league action, however, signing a contract means he will now solely compete in the Las Vegas summer league with the Hawks organization.

It comes to no surprise that Atlanta is pulling this move after Magette spent part of the 2016-17 season with the team by being signed to a training camp contract. He made the most of his shortened time and while he was considered to be an extreme long shot to even come close to making the final roster, Magette impressed coaches so much that he was the final cut before the regular season started.

“He’s a good player,” Hawks head coach Mike Budenholzer said after his cut a year ago. “We got to see it in practice more than anyone else and were totally impressed.”

While he only played in 17 minutes and averaged one point, one rebound and 1.7 assists in just three of their seven exhibition games, he clearly exuberated an impressive NBA talent.

Magette graduated from Spain Park in 2008 and would have most likely won a state championship with the Jags had it not been for running into DeMarcus Cousins and LeFlore in the school’s first ever Final Four matchup. After graduating he attended the University of Alabama at Huntsville where he led the Chargers to three Gulf South Conference Championships and two appearances in the Division II Elite Eight.

While most of his professional career hasn’t been spent in the NBA, it doesn’t mean he hasn’t been successful. He has spent two seasons playing overseas with Landstede in the Netherlands and Koroivos Amaliadas in Greece. The other three years of his professional career have been spent with the NBA D League’s (now the G League) Los Angeles D-Fenders.

He has improved each year as well, showing a better understanding of the game. Magette has gone from 10.3 points to 11.5 and most recently 15.8 per game this past season. He has also upped his assist total from 6.9 his first year with the team all the way up to 10.7 this past season, which led the entire G League.

His efforts led to him being named an All-Star this past season and was in the conversation for the MVP award as well. Watching Magette in high school, his sharp shooting from three where he would pull up from just inside the half-court line was probably his most jaw-dropping ability, but watching him with the D-Fenders, he has become one of the better true point guards and ball handlers I have seen in a long time.

Clearly the Hawks have started taking notice of this same thing and with only two point guards on their roster, they decided to take a chance on Magette with what is reported to be a one-year two-way contract.

What this means is that Magette will join the Hawks organization for the entire season, but a chunk of that will be spent in the G League. Two-way players are only allowed to spend a maximum of 45 days in the NBA, they earn at least $75,000 versus the average contract of $25,000 on a G League contract alone.

His dad Jimmy Magette posted on twitter, “spending some time this evening with (my son) in Atlanta #quickdrivefromhoover,” cementing the fact that he and his family needed to rush to Atlanta for a last second trip they weren’t expecting.

While right now he is on a two-way contract, Magette could easily spend the majority of his time during the 2017-18 season on the Hawks’ roster, and who knows, if he impresses enough during the upcoming summer league and throughout the season, he may be inking a bigger deal sooner rather than later.

By GRAHAM BROOKS / Staff Writer HELENA–Being thankful, having a great attitude and working hard to do your best were... read more