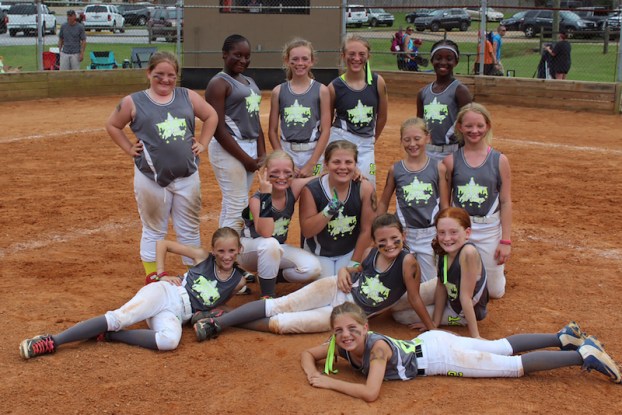 Helena 10U Legends qualify for World Series in Gulf Shores

“Initially, during spring season, there were four city teams. From those four teams, the 13 girls on the Legends All Star Team were chosen,” explained Coach Rick Sprouse. “We began practicing May 12 and practiced every day until the tournaments started. We were led by two 9-year old pitchers and some solid 10-year old hitters.”

“We have three talented pitchers on our team whose hard work and dedication helped us remain competitive,” said pitching coach Sue Parsons. “All three girls are a joy to work with and improved throughout the season.”

“We pitchers have a lot of fun fighting battles with our opponents. It’s a great feeling helping your team to victory, and winning the Area Tournament was the highlight of the season,” said Marlee Parsons.

The Legends All Star Team compiled a 13-3 record during their All Star run, then went 11-1 in Area Tournaments, and won the Area Championship on June 17.

“It’s been seven years since a 10U Helena Team has won the area Championship. Our two ace pitchers, Marlee Parsons and Jocelyn Fulmer, led us to the 11-1 Area Championship,” Sprouse said.

“Winning the Area Championship and compiling the 11-1 record gave us the No. 2 overall seed in the state tournament the weekend of June 24-25 and gave us a Top 9 finish against teams from all over the state.”

Catchers Hannah Williams, Anna Grace Johnson and Lola Wade worked with their pitcher to build a relationship based on trust and honesty. The catchers did a great job keeping their pitchers focused and motivated.

“My favorite part of the All Star season was getting to play with my friends. This 10U All Star Helena team has built a great friendship and our coaches really inspired me,” said Lola Wade.

“I loved how our team worked together, always lifted each other up and never said anything negative about each other. We always showed good sportsmanship, worked hard and played hard,” noted Hannah Steele.

“Every girl on the team made a contribution at some point that helped us put together this unbelievable run to the Area Championship,” Sprouse stated.

A favorite moment for the girls was when Coach Rick splashed all of them with water while they were having a team photo taken. They all grabbed water bottles and chased him around the field spraying him and laughing.

With their finish in the state, Helena 10U qualified for the World Series in Gulf Shores, Alabama.

The team will be raising money for the trip to continue this incredible softball run. Any donations would help. Please contact Laura Sparks at (205) 240-4995.

By LAURA BROOKHART / Community Columnist A beautiful morning dawned on Saturday, June 3 for the opening day of the... read more