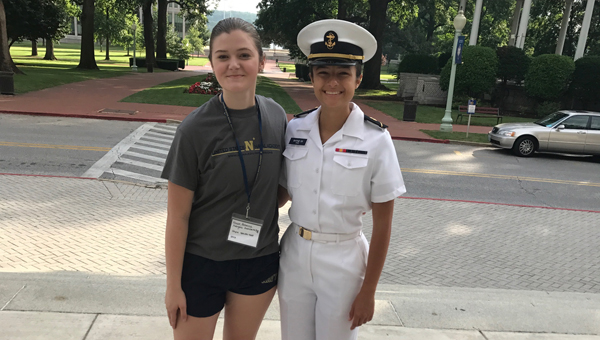 Rebecca House, left, spent the week of June 12 at the U.S. Naval Academy in Annapolis, Maryland, for STEM Camp. (CONTRIBUTED)

Calera teen Rebecca House spent the week of June 12 at the U.S. Naval Academy in Annapolis, Maryland among 350-400 rising 10th graders to participate in STEM Camp—short for science, technology, engineering and math.

“I read about the program on the Internet and applied for the camp back in March,” House explained. “The application was pretty extensive. They wanted to know class rank, GPA, clubs and sports, and they promised to let us know something the first of June. Since the camp was the week of June 12, we had to hurry to get travel reservations and to pack.”

House said the students were put into small groups and shepherded by a midshipman at all times. Her group included students from Oregon, Nevada, Iowa and Texas, but the attendees also included at least two international students from China and Saudi Arabia.

Two additional camps were held at the facility this summer for rising ninth and 11th graders.

“We had three or four subjects we studied, and had different instructors for each course,” House said. “We learned about systems engineering and how different careers interest the Navy. The academic exercises were hands-on problem solving in the classroom.”

One of the exercises in her group, for example, was determining how to build a saltwater battery, House said.

House said the week was spent mostly on the base, except for a day trip to Washington, D.C. and the Smithsonian Institution.

“The academy is large, and the architecture is overwhelming,” she said. “It was very impressive and it looks very official!”

“The camp broadened my perspective about another career choice and the kinds of things I want to do,” she said. “I will definitely consider a military career. I learned a lot about the Navy from the midshipman assigned to our group.”

House has attended Cornerstone Christian Academy since kindergarten but will transfer to Indian Springs School for the upcoming term.

She plans to continue playing volleyball at her new school, and to continue her interest in math, science and history.

House, the daughter of Angie Garrett and Corey House, also serves as pianist at the Oak Grove Methodist Church in Alpine.

“I started piano lessons at age 8,” she said. “One day we saw a sign at the church about the vacancy when we were going to Logan Martin Lake. I applied and have been at the church for about a year and a half. I’m the youngest staff member and the youngest attender! I was nervous at first, but the people have been very loving and encouraging to me.”