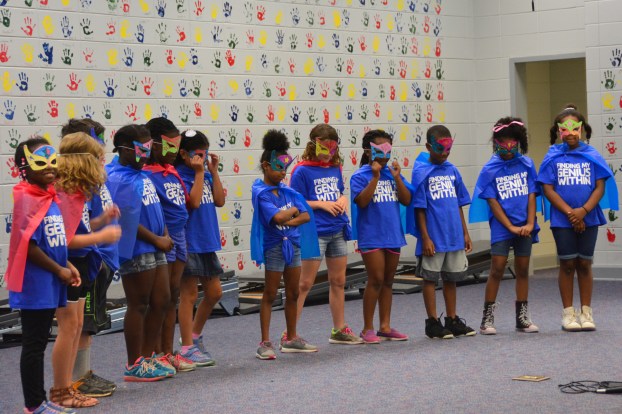 ACS students going into the third through sixths grades were recognized for their talents and skills at an awards ceremony on June 30. (Reporter photo/Amalia Kortright)

ALABASTER – The Power Scholars Academy program celebrated the end of its second year at Meadow View Elementary School with an awards ceremony for ACS students who participated on Friday, June 30. During the ceremony, students received certificates based on their individual talents and skills.

“We focus on reading and math,” Bickler said. “It’s mostly game-based, and they don’t know that they’re learning.”

Bickler said the program implements electives such as cooking, art and coding, which students can pick from.

“Instead of us just placing them into classes, they got to decide what they they wanted to do each week,” Bickler said.

Despite facing Internet issues during this year’s post-program test, Bickler said she saw a significant amount of growth in the students.

“I can’t put into words how it helps their whole selves,” Jones said. “It affects their bodies, minds and spirits. They come in and think it’s going to be just like school. Then they start having fun and they don’t want to leave.”

When the program was first implemented in the Alabaster City Schools system, Jones said it originally only included students going into the third through fifth grades. After a push from students, PSA decided to extend the program to include rising sixth graders.

“We had sixth graders who were just begging to come back,” Jones said.

Incoming sixth grader Jasmine Lewis said she hopes they will extend the program again so she can attend next summer.

Jasmine said one of her favorite parts about participating in the program was that she learned how to swim.

“They told me not to be nervous when I took the swimming test,” Jasmine said. “I jumped in the pool, touched the bottom and just started swimming. It felt so good. I was so happy.”

Jones said Power Scholars Academy is a joint effort from ACS and the YMCA of Greater Birmingham, and aided by a grant from the Building Educated Leaders for Life program.

“This is such a great way to extend learning over the summer,” Vickers said.

By MICHAEL J. BROOKS Special to the Reporter Calera teen Rebecca House spent the week of June 12 at the... read more