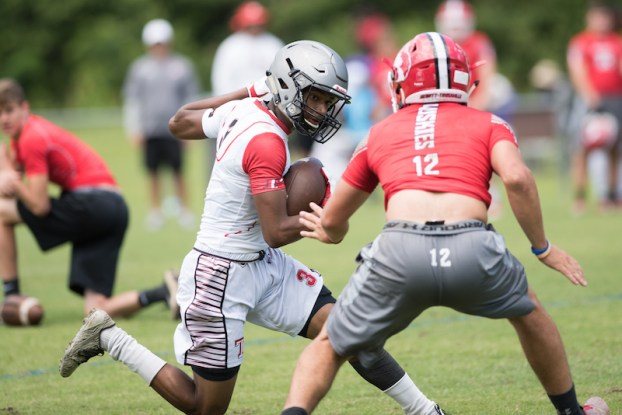 A Thompson wide receiver makes a move in a 7-on-7 game against Hewitt-Trussville. The Warriors have now won two championships in a span of just three days. (Reporter photo/Keith McCoy)

PRATTVILLE – For the second time in a span of three days, the Thompson Warriors football team was a champion. After winning the inaugural Blackwatch 7-on-7 tournament over Hewitt-Trussville on Tuesday, June 27, Thompson traveled down to Montgomery to take place in the USA ALFCA Regional 7-on-7 tournament featuring some of the state’s best teams.

The Warriors went 5-0 in pool play and then 4-0 in bracket play to not only win the championship, but finish the tournament a perfect 9-0, bringing their 7-on-7 record through two events to an unbelievable 14-2.

What was most impressive was the run they went on in bracket play to win the championship having to beat Wetumpka, Hillcrest-Tuscaloosa, Hoover and Sidney Lanier on their way to the title.

After earning the No. 1 seed thanks to a perfect pool-play record, Thompson squared off against Wetumpka in the first game of bracket play and handled the Indians with ease winning 31-0 to advance.

This advanced them into a matchup with Hillcrest in the quarterfinals, who went 11-1 last year and set several offensive team records. Thompson remained focused and defeated the Patriots by a final score of 28-19 to make their way to the semifinals.

In the semis, none other than the Hoover Bucs awaited the Warriors. In actual season play, Thompson has never come out on top in a matchup with the Buccaneers, but they were able to beat them in one of the better 7-on-7 matchups of the day by winning 29-26 to seal a spot in the championship game against Sidney Lanier.

Thompson, like they had all day, continued their momentous run and took down Lanier 26-16 in the championship game to take home their second 7-on-7 title of the summer, but more importantly making them a perfect 2-2 in just three days’ time.

Just as impressive as their bracket play was Thompson’s pool play run. The Warriors took down teams like Central-Phenix City, Spanish Fort and Hewitt-Trussville in three of those five wins, all of whom were playoff teams last year with potent offenses.

While quarterback Taulia Tagovailoa and receivers like Ahmad Edwards have been key in the strong 7-on-7 play, their defense deserves a whole lot of credit. In 7-on-7 action, it is extremely hard to stop teams from scoring and Thompson’s defensive players have been extremely impressive in doing so.

There is clearly a ton of hype surrounding the Warriors right now, but they don’t seem to be letting the pressure of the moment overwhelm them, instead they are taking it as fuel to prove that all of the hype is warranted. So far through the first week of 7-on-7 action, the Warriors have created a tone of buzz and are jumping on a lot of people’s radar.

As head coach Mark Freeman and his team knows, however, a championship run may start now, but there is still a lot of work to be done and the regular season 11-man game with pads is a whole different animal.

Thompson wins first 7-on-7 of summer

By ALEC ETHEREDGE | Sports Editor NORTH SHELBY –  The talk of the metro Birmingham sports world this offseason has... read more