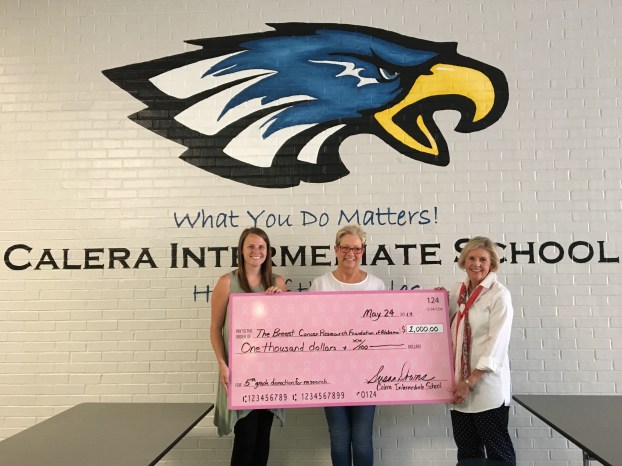 Calera Intermediate School recently donated $1,000 to the Breast Cancer Research Foundation of Alabama to help in the fight to end breast cancer. (Contributed)

For the past six years, the BCRFA has partnered with Calera as they “Go Pink” to raise money for life-saving breast cancer research.

“We’re very proud that since 2011 the city of Calera has raised almost $200,000 with the community’s support for BCRFA,” Mayor Jon Graham stated in a news release. “The unity of the city, our schools, local businesses and Calera residents allow us to grow our fundraising efforts for breast cancer research each year.”

The Breast Cancer Research Foundation of Alabama supports a comprehensive approach to battling breast cancer through support of collaborative and innovative research to help diagnose, treat, prevent and eradicate the disease.

Since its inception in 1996, the BCRFA has contributed over $6.75 million to fund research at the UAB Comprehensive Cancer Center and with their collaborative partners. All funds raised stay here in the state of Alabama, but the research will have a global, life-saving impact.

By NEAL WAGNER / Managing Editor Many Shelby County cities are among the best in the state for those... read more