While Main Street revitalizes, artists use colorful back door

Teresa Wamble added a delicate black line to one of the whimsical faces on the very unsymmetrical gourd she was painting while Becky Cox-Rodgers put deft touches to a geometric pattern on another gourd.

Mack Gothard focused on the tiny gourd owl inside a hollow in a bigger gourd tree. The three artists were working in the back room of Falcon Art Supply, completely oblivious to dump trucks and other heavy equipment clanking and rattling on torn-up Main Street out in front of the store. 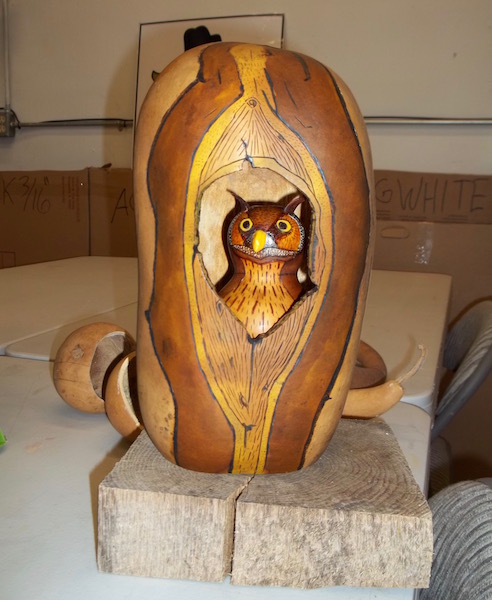 Cox-Rodgers has taken a cheerful approach to coping with the Main Street project making such a dust and clatter out front. She has created an oasis of art behind the store she manages for Phil and Suzanne Hurst.

The gourd artists meet in the classroom at the rear of the store once a month. At other times the room is used for art classes.

“We are the Montevallo Gourd Patch of the Alabama Gourd Society,” Wamble explained with, perhaps, a hint of wryness.

The rear entrance to Falcon is as welcoming as any storefront with an umbrella table, flowers, stepping stones and a comical downspout that looks like a snake, complete with forked tongue. There is parking, too, which is in short supply on Main right now.

The Main Street revitalization project is on schedule to be completed in December, said City Clerk Herman Lehman. Merchants received a total of $6,000 in grants, at $500 each, to spruce up their stores.

Some have taken it a few more steps—as in Falcon’s jaunty rear entrance. Walt Czeskleba used his grant to replace a door, Lehman said, and then went on to remove old tin from the front of the building and add tiles. “He has put a lot of work into it, and it’s looking good,” Lehman said.

At Bradford Realty, the former Mitchell Spears law office, on the corner of Main and Vine streets, extensive work includes uncovering old windows to give the building a look more in character with its 19th Century roots.

While the gourd artists work their magic, Morgan Gilmore waits for customers in Lucky Penny Boutique. Gilmore is a clerk in the shop owned by Jacqueline and Dessilyn Chappell where women shop for clothes and accessories. “People still find us,” Gilmore said, “but I think it is a little harder.”

At least customers can park in front of the Lucky Penny. Across the street Falcon, State Farm, Hughes Building Supply, Fotowerks and Czeskleba’s store look out onto a wide expanse of gravel, orange barrels and yellow tape. In large letters on the front of Falcon Art Supply customers are directed to: “Use Back Door.”

By NANCY WILSTACH / Community Columnist Could empathy increase when youngsters and oldsters start spending time together? That is the question... read more