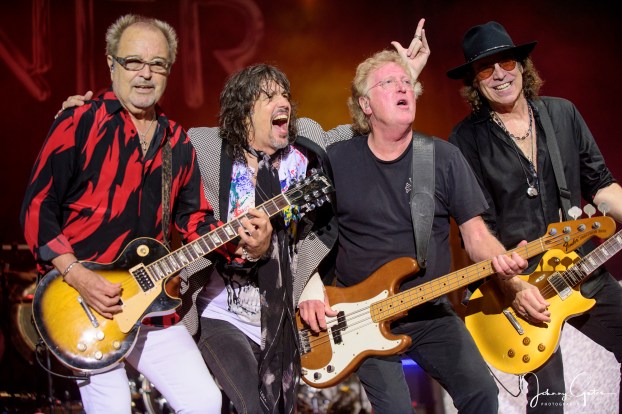 PELHAM – Classic rock band Foreigner will make a stop at the Oak Mountain Amphitheater on Sunday, July 30, at 7 p.m. as a part of its worldwide 40th Anniversary Tour.

Foreigner is responsible for rock and roll hits such as “Juke Box Hero,” “Feels Like the First Time,” “Urgent,” “Head Games,” “Hot Blooded,” “Cold As Ice,” “Dirty White Boy,” “Waiting for a Girl Like You” and the worldwide hit “I Want to Know What Love Is.”

The choir from Birmingham’s John Carroll High School will be performing with the band for the classic hit “I Want To Know What Love Is,” according to a news release about the upcoming concert. Foreigner will donate $500 to the choir for appearing with the band and the choir will sell Foreigner CDs at the concert to raise monies for Foreigner’s charity partner, The Grammy Foundation. All of the proceeds from the choir’s CD sales will go toward this initiative.

Foreigner and The Grammy Foundation are intent upon helping to keep music education available to students as part of the core curriculum in high schools throughout North America, according to the release.

For more information about the concert, go to livenation.com/venues/14486/oak-mountain-amphitheatre.

COLUMBIANA – A Montevallo man, who formerly listed an address in Pelham, was arrested and received an additional charge sexual... read more