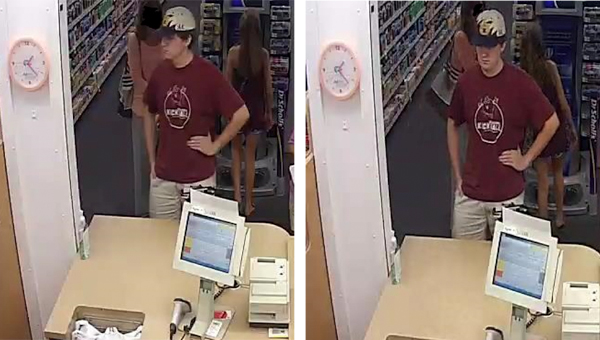 Surveillance cameras captured images of a suspect in a robbery at CVS Pharmacy at 105 Inverness Plaza on Monday, July 3. (CONTRIBUTED PHOTOS)

HOOVER – Hoover Police are searching for a suspect in a robbery of the CVS Pharmacy at 105 Inverness Plaza on Monday, July 3.

At about 1:25 p.m. Monday, a male entered the store and presented a note to a cashier demanding Oxycodone from the pharmacy, according to a press release.

Although he did not present a weapon, the suspect kept one of his hands under his shirt, implying that he was armed.

The pharmacist gave him a bag containing iron and folic acid supplements.

After receiving the bag of pills, the suspect got into a dark colored, small four-door sedan and fled the area.

Surveillance cameras captured images of the suspect while he was inside the store.

Anyone who has information about this case or recognizes the suspect should contact Detective Daniel Lowe at 739-6762.

If someone wishes to remain anonymous and qualify for a cash reward, they an contact Crime Stoppers of Metro Alabama at 254-7777.

PELHAM – The city of Pelham hosted its fourth Independence Day celebration, Fire on the Water, on Monday, July 3,... read more