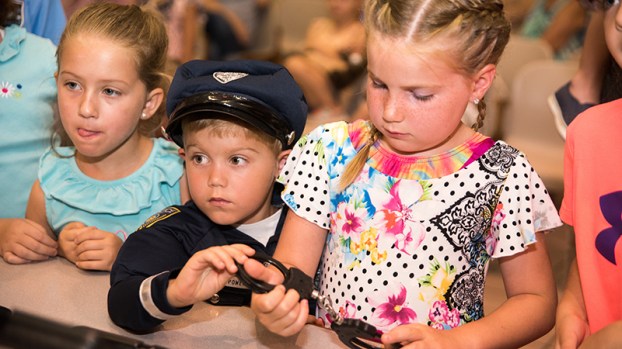 Many children understand and learn at a young age that whenever there’s an emergency to dial 911 and typically police officers are some of those that arrive on the scene. On July 5, children learned more about what law enforcement officers do as well as some of the tools and equipment they carry.

Nelson came to Helena City Hall dressed in full uniform as many children quizzed him about what he wore on his belt.

In addition to describing the gear he wore everyday, he also discussed some of the other things police officers may use on a day to day basis including a window tint meter, breathalyzer, ballistics helmet, handcuffs, a taser, pepper spray and more.

Nelson gave valuable tips to those in attendance including how to avoid being a victim of a break in and about gun safety.

“Most of the theft crimes that we see happen in Helena we describe as crimes of opportunity,” Nelson said. “Usually these people will not break in and will first check to see if a car door is unlocked and they will then take any valuables. The best way we can tell you to stay safe is by locking your doors.”

Nelson said members of the Helena Police Explorers typically hand out gun safety locks at many events and encouraged parents who own firearms to use the devices if they do not own a gun safe.

“We encourage the gun safety locks but the main thing is to never look at or touch a your parents gun and you should always be with a parent,” Nelson said. “Don’t even point a toy gun at another person.”

One woman in attendance thanked Nelson and the HPD for their continued patrol of Helena neighborhood streets.

“We will enforce laws more strictly in neighborhoods because of how many children are in the neighborhoods,” Nelson said.

To conclude the program, children and parents went outside to check out one of the Helena Police Department Chevrolet Tahoe patrol vehicles. Children climbed into the cab of the vehicle and smiled as parents and guardians snapped photos.

The Helena Summer Reading program will conclude on Wednesday, July 12 with the Wild West Show close out celebration at 2:30 p.m.

In addition to the summer reading program, the Jane B. Holmes library also hosts “Story Time with Ms. Jennie” every Tuesday and Thursday at 11 a.m.

HOOVER – Hoover Police are searching for a suspect in a robbery of the CVS Pharmacy at 105 Inverness Plaza... read more