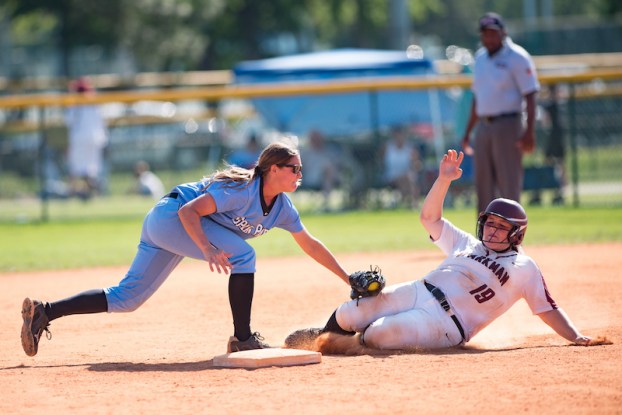 Spain Park’s Mary Katherine Tedder was recently named as a MaxPreps First Team All-American. She has been on the Jags’ softball team since seventh grade and is now moving on to the University of Texas. (File)

Since its inception in 2001, Spain Park has been home to some of the state’s best athletes including names like Josh Magette, William Green, Nick Mullens, Austin Wiley, Jamal Johnson, Hannah Collier, Michael Johnson and many, many more, but one name has been a staple of the program since she was in middle school giving her one of the longest runs in the program’s history.

The spring of 2017 marked the end of that run for softball star Mary Katherine Tedder, who has repeatedly established herself as one of the state’s best softball players over the past six years, having graced the softball field since seventh grade.

In those six years, she came to the plate a total of 747 times and struck out in just 34 of those plate appearances putting her on-base percentage through the roof.

While softball at Spain Park has been steadily improving over the last 10 years under head coach C.J. Hawkins, Tedder was a big part in helping the program take that next step as she led the Jaguars to back-to-back state tournament appearances in her junior and senior seasons, including a state runner-up finish her junior year.

During her final run in 2017, Tedder batted .460 at the plate, picking up 63 hits. Those 63 hits included 40 singles, eight doubles, six triples and nine home runs, which led her to picking up 57 RBIs. The most impressive feat, however, was that of her just two strikeouts in 137 at bats, meaning she made contact or drew a walk in 135 of her 137 plate appearances, an unheard of number.

This was not only recognized locally as she was named a first team member of the All-County Team, but also state-wide and most recently nationally.

She finished as the ASWA 7A Player of the Year in the state and fourth in the overall player of the year ranking with 70 votes. That could have been enough, but with the amount of national recognition Spain Park got all year, Tedder was easily recognized on a much wider scale than just locally.

MaxPreps.com recently came out with its 2017 High School Softball All-American Teams, and sure enough Tedder made the squad. After her strong senior season and her unbelievable career with the Jags, she was recognized as a first team infielder putting her among the best 10 infielders in the entire country.

Despite caring more for her teammates and coaches than any individual honor, Tedder couldn’t have asked for a better way for her storied high school career to come to an end as her efforts and hours of hard work over the years paid off. She will now move on to the University of Texas and try to continue a career that many people will be talking about for a long time to come.

It’s not just what she did on the playing field that makes Tedder so special, but what she did for her teammates and the mark that she left on the softball program that make her one of the greatest athletes in the school’s history.

By ALEC ETHEREDGE | Sports Editor VINCENT – We are exactly 54 days away from the 2017 high school football season... read more