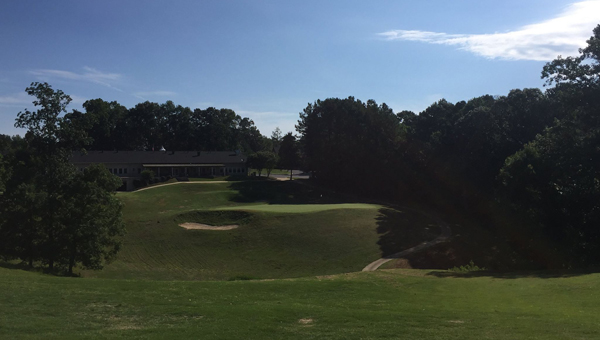 The facility and golf course, which closed about eight years ago because of financial problems, reopened in October 2016 after months of renovations and improvements.

Heatherwood Hills was formerly a private club but is now semi-private.

“It is open to the public, and we want people to feel welcome,” President Mary Anna Raburn said.

The club boasts ample space and services for events and a challenging par-71 golf course.

About 100 local homeowners and other stakeholders pooled funds to purchase the property, pay off outstanding debts and perform the work necessary to re-open the club, said Raburn, who lives in the area.

Though vandals damaged the clubhouse while it was closed, the property was not in as bad of shape as one might imagine after eight years of vacancy because local homeowners voluntarily mowed the course and performed other maintenance.

Though the course is in good shape and will be considered more playable than its previous incarnation, McHughes and Raburn said more changes are coming.

The course is relatively short at 6,300 yards from the back tees, but the fairways are tight.

“You’ve got to think your way all around it,” McHughes said. “We say if you can come out here and play, you can take your game anywhere.”

Rates at the course are being discounted while the business gets off the ground.

Golfers currently can play a round for $30 on weekdays and $40 on weekends.

Cypress Golf Management is serving as operator/manager of the club.

A grand opening event was held June 17, at the conclusion of the latest round of work, which totaled about $100,000.

In addition to a pro shop and bar, the clubhouse hosts daily lunches, Friday night dinners, Sunday breakfast until 1 p.m. and special events.

The dinners are open to the public, but attendees should make reservations by calling the club at 502-4441.

Food is prepared under the direction of chef Richard Mack.

The banquet room features a dance floor and access to a spacious outdoor patio.

There is also a bar area that can be rented.

“We’ve had tremendous support from the neighborhood,” McHughes said. “We get so many people who come to us and say, ‘I’m so glad this is back open.’”

Managers want the club to be a community hub, Raburn said, and mentioned possibly hosting socials and neighborhood association meetings in the future.

“The community effort was so positive,” Raburn said. “There’s a great community atmosphere in Heatherwood, and I belive this entire area is that way.”

Heatherwood Hills Country Club is located at 400 St. Anne’s Drive, Birmingham, which is accessible by both Valleydale Road and Caldwell Mill Road.

Events Coordinator Sandy Deaton can also be contacted by email at events@heatherwoodhills.com.

FROM STAFF REPORTS MT LAUREL – Mt Laurel residents are thrilled to only be a short walk or golf cart... read more