COLUMBIANA – A 35-year-old Birmingham woman is facing a felony child abuse charge and up to 10 years in prison after she allegedly submitted a Shelby County juvenile to “medical neglect and physical neglect” earlier this year. 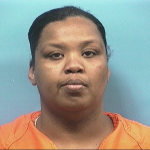 Authorities arrested Valerie Lanice Merchant, who lists an address on Healtherbrooke Road in Birmingham, on July 1 and charged her with one felony count of willful abuse of a child younger than 18.

Merhcant’s arrest came about a month after a Shelby County grand jury issued a one-count indictment against Merchant after reviewing evidence in her case.

According to the indictment, Merchant allegedly subjected the juvenile to “medical neglect and physical neglect to include shaking, which caused trauma and hemorrhaging and hydrocephalus of the brain.” The indictment claimed the alleged abuse happened between Feb. 1 ad Feb. 6.

Merchant is set to appear in Shelby County District Court on Aug. 9 at 8:30 a.m., according to court documents.