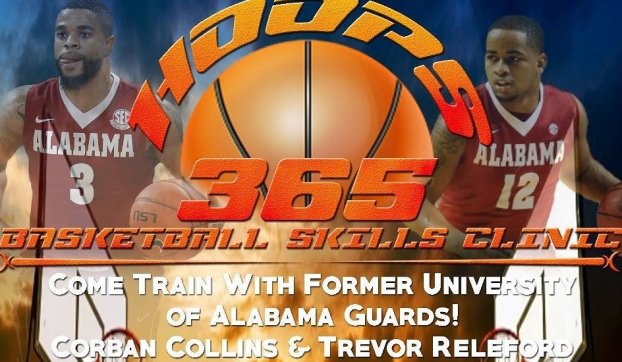 Trevor Releford and Corban Collins, both former point guards on the Alabama basketball team, will be hosting a camp at the BlackWatch Sports Complex on Sunday, July 16. (Contributed)

NORTH SHELBY – When you see Trevor Releford step onto the basketball court, you might think to yourself, “this guy doesn’t have what it takes,” which is something he has relied heavily on during his career to deceive guys that might not take him seriously.

Standing at 6-foot, 190 pounds, the former Alabama point guard plays with no fear and makes defenders pay for any doubt of his ability that may trek across their minds.

Releford has used his speed, shiftiness and spider-man like handles to not only become one of the best point guards in the Crimson Tide’s history, but also as he pursues his professional career overseas, where he has been dominant.

He, along with another former Alabama standout in Corban Collins, will give young Shelby County basketball players the opportunity to learn how to take your game to the next level and strive at your chance to become a great basketball player as well.

Collins, who played four years at Morehead State, transferred to Alabama for his graduate year to compete with the Crimson Tide during the 2016-17 basketball season. He did so well not only on the court but off the court that he was named the team’s co-captain, earned a not on the SEC Community Service team and received the Coach Avery Award, which is given from head coach Avery Johnson to one of his players for attitude and effort throughout the season.

The attitude and effort he played with led to him playing in 32 games and making 14 starts in which he finished second on the team with 3-pointers draining 45 shots from beyond the arc. He averaged seven points and 1.5 assists per game with nine double-figure scoring games.

“I had people investing in me when I was younger so I’m doing the same for youngsters coming up now,” Collins said on Twitter of his decision to help out with camps like this one.

Releford was a starter on the Alabama men’s basketball team for four consecutive years as he graced the court since stepping on campus as a freshman where he started in 36 of 37 games. In his time with the Crimson Tide, Releford finished fourth in program history with 1,873 points, first in school history and fifth in SEC history with 263 steals, first in career games played with 134 and second in career starts with 126; making him one of the greatest point guards and overall players in school history.

Since his college days, Releford has transferred his game to the professional ranks overseas where he has played with four different teams and just signed with his fifth. In his first season he averaged 18.2 points and 4.6 assists per game. He has averaged at least 12.6 points and 3.7 assists or higher in all four of his professional years, which has cemented him as a very consistent and top tier player overseas.

Again, it’s not his size that made him great, but the tremendous skill level he possesses at being able to get around defenders, cross them up with dribble moves and be nimble around the basket. His great vision, hands and instincts, also are key to him being a defensive nightmare despite being outsized on many nights.

These are all skills that you will be able to learn from both of these guys at this rare camp opportunity. If you are a young basketball player or athlete in the Shelby County area, it’s a great opportunity to learn from two guys that know what it takes to be great.

FROM STAFF REPORTS SHAWNEE, Okla. – Lauryn Hoagland of Harpersville and JT Ellison of Calera are both competing in the... read more