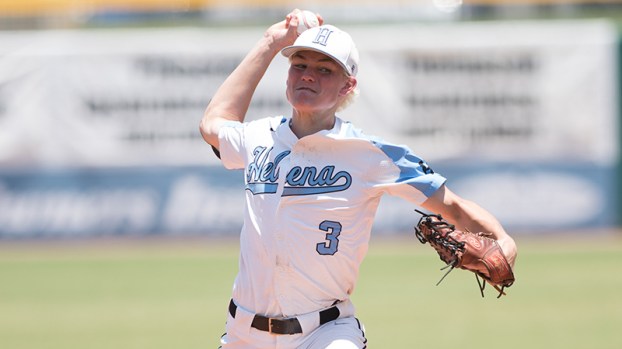 Helena starting pitcher and class of 2018 prospect Landon Green announced he was committed to play baseball for the University of Alabama on July 6. (Reporter Photo/Keith McCoy)

HELENA–Helena High School varsity pitcher Landon Green turned in one of the gutsiest performances in the winner-take-all game to decide the Class 6A state champion a few months ago, and the University of Alabama was one of those that noticed.

Green, then a junior and current class of 2018 right-handed prospect, pitched six and two-thirds innings where he allowed just two hits and struck out five in the final game of the Class 6A championship series against Cullman.

On Thursday, July 6, Green announced on his personal Twitter account that he would be joining the Crimson Tide baseball program upon graduating from Helena in 2018.

“Blessed to say that I have committed to play baseball at The University of Alabama! #RollTide,” Green wrote accompanied with photos of Alabama’s Sewell-Thomas Stadium, a picture with Tide head coach Brad Bohannon and a picture on the playing field.

After notching a win in the final game of the season to help the Huskies capture its first baseball state championship, Green finished the season with a final record of 11-0 on the mound.

Green has become the second baseball player from the Helena program to sign with the Tide. Class of 2017 catcher Sam Praytor will also suit up for Alabama this coming season.

Green and other commits will try and turn around a Crimson Tide baseball program that’s trying to rebound from a dismal 2016 campaign.

Alabama introduced Bohannon as the new head baseball coach on June 1, and Bohannon immediately took interest in Green. Bohannon is known for his strong recruiting and was awarded the 2015 American Baseball Coaches Association and Baseball America National Assistant Coach of the Year prior to coming to Alabama.