Arrest made in pharmacy robbery

COLUMBIANA – A man wanted for robbing the CVS Pharmacy in Inverness turned himself in to police on Friday, July 7. 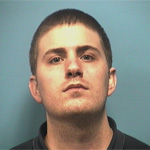 Edward Lawler Taylor, 25, of Birmingham is charged with pharmacy robbery and is being held at the Shelby County Jail with bond set at $100,000, according to a news release from Hoover Police Department.

Taylor faces similar charges in another jurisdiction, according to the release.

At about 1:25 p.m. on Monday, July 3, a male entered the store and presented a note to a cashier demanding Oxycodone from the pharmacy, according to a release.

Although he did not present a weapon, the suspect kept one of his hands under his shirt, implying that he was armed.

The pharmacist gave him a bag containing iron and folic acid supplements.

After receiving the bag of pills, the suspect got into a dark colored, small four-door sedan and fled the area.

Police circulated images of the suspect captured by surveillance cameras while he was inside the store.

By ALEC ETHEREDGE | Sports Editor  NORTH SHELBY – When you see Trevor Releford step onto the basketball court, you... read more