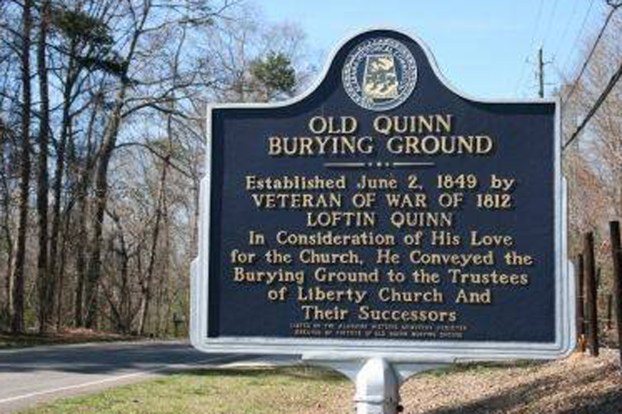 The Chelsea Historical Society’s first walking tour was held at the Old Quinn Burying Ground, one of the oldest cemeteries in the Chelsea area. (Contributed)

According to Chelsea Historical Society Chairman Tony Nivens, 17 people from Chelsea attended despite the sweltering heat that morning.

“We told stories about the settlers and their families, and we tried to relate it to Chelsea today,” Nivens said.

Nivens said they chose the tour to take place at the Old Quinn Burying Ground because of its historical significance to the Chelsea area.

“It’s one of the oldest cemeteries in town,” Nivens said. “Loftin Quinn gifted it to Liberty Baptist Church and a lot of early settlers are buried there.”

Nivens said the historical society’s historian Jenny Bartlett came up with the idea of the walking tour.

“Jenny is big into genealogy. She’s been to several events like this one and she wanted to do something for members,” Nivens said.

While many visitors had direct ties to early settlers, Nivens said he wants the tours to be inclusive to everyone.

“We want to include people outside of the city. This is more about the Chelsea area,” Nivens said. “We had four to six people who were new to Chelsea and just wanted to learn about its history.”

The historical society is planning to host more walking tours through several cemeteries in the Chelsea area. Nivens said they are looking to host the next tour in September.