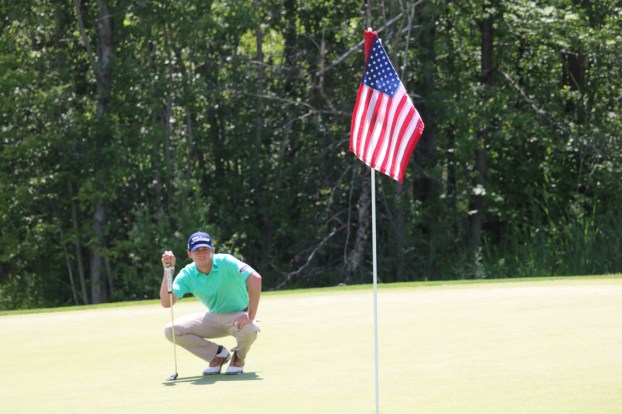 Michael Johnson had his best ever finish on the Web.com Tour by finishing in a tie for 12th at the LECOM Health Challenge on Sunday, July 9. (Contributed/Kevin Prise, PGA Tour)

FINDLEY LAKE, N.Y. – Michael Johnson was a star on the golf course well before he stepped onto the golf course for his first ever PGA Tour event last July at the Barbasol Championship where he finished in solo third and just one shot outside of a playoff.

Johnson fired a final round 65 on that Sunday to tie his tournament low and get within two shots of joining rare company and winning during his debut on the PGA Tour.

It really wasn’t something that came as a surprise after seeing other young golfers take the sport by storm such as Jordan Spieth, Justin Thomas and Smylie Kaufman, all guys he competed with and even beat growing up.

Attending Spain Park High School and Auburn University, Johnson was considered one of the top junior golfers in the country at both stops, including some lists that pegged him as the top college golfer in the country after a dominating senior year with the Tigers.

While his golfing career has been nothing but successful so far, there was a major obstacle in the way that could have derailed his golfing future forever.

On March 25, 2006, his older brother Bradley Johnson passed away in a tragic car accident, which could have made it tough for Michael to get back on the golf course as they both were avid golfers.

And while it was tough for he and his father Hugh Johnson to get back out on the links, once they did they were back at home and knew its where they belonged.

Michael went on to spend hours and hours on the golf course leading to his strong high school and college career as well as his inspiring PGA Tour debut.

He did, however, go on to face some tough times once declaring his professional status on the Web.com Tour. Heading into the LECOM Health Challenge in Findley Lake, New York, Johnson had played in 15 events making just four cuts and a career-high finish of T25.

That all changed, however, on Sunday, July 9, as Johnson brushed off the rust and battled to a career-high T12 finish in the LECOM Health Challenge.

Johnson shot rounds of 67, 74, 67 and 67 to finish the tournament at 13-under for his highest finish as a professional golfer. His struggles in round two on Friday were the only thing keeping him from a top 10 finish and possibly even a top five finish. He finished 10 shots off of Chesson Hadley’s winning total of 23-under par, but was just one shot outside of a top 10 finish and three shots outside of a top five finish.

Had he fired another 67 on that Friday to keep the consistent trend, Johnson would have finished the tournament in solo third at 20-under. What could have been isn’t the point though, it’s what is to come.

Being named the No. 1 player to watch on the Web.com Tour this past December at the age of 23 and now just 24 years old; Johnson is steadily shaping into form as a professional golfer and this taste of success may be all it takes to send him on a powerful rampage of momentum the remainder of the 2017 season.

Golf is a game of momentum and timing, and when you are swinging the club well and everything you envision is coming to fruition, you gain all the momentum you need to win. Johnson is on the verge of a breakthrough that could come at any moment and there’s a high likelihood that moment comes before the end of 2017.