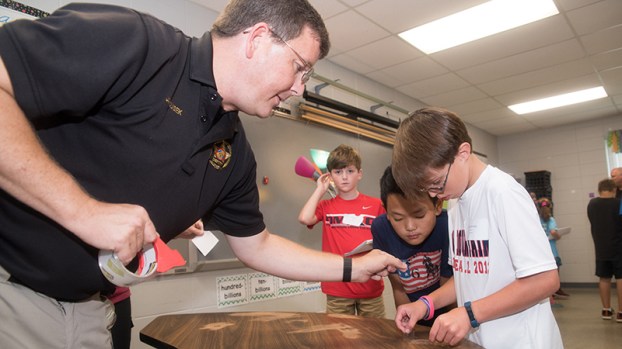 After concluding the five-day camp, Shelby County resource officers and members of the Shelby County Board of Education were equally impressed with the effectiveness of the camp that aims to give students a better understanding of law enforcement’s role in the community.

The inaugural camp took place at Oak Mountain Intermediate School from 8 a.m. to 4 p.m. and the camp aimed to develop leadership, values and knowledge in each camper through a highly structured educational and adventurous camp experience.

On Tuesday, July 11, Shelby County Schools Assistant Superintendent Dr. Lewis Brooks and Shelby County Sheriff’s Office Sgt. Nathan Kendrick attended the Shelby County Board of Education meeting to talk about the inaugural camp and give an update on future plans for the camp.

“Basically, this camp was done by school resource officers but the camp was designed to help create a better understanding of law enforcement’s role in our community,” Brooks said. “We had classes on citizenship, CPR, etiquette, discipline and we learned a lot about the tactical teams from the sheriff’s office. My favorite was getting to see the sheriff’s helicopter that I actually got a chance to go fly in which was really neat. So really this camp was about building relationships with the sheriff’s department, who was a huge partner to us in regard to school safety.”

Brooks and Kendrick both emphasized that they would like to see the camp expand to other Shelby County communities in the future after the success they saw at Oak Mountain.

“I really do appreciate the opportunity for you guys to let us do this because it’s been awesome,” Kendrick said. “I’ve been with the schools for two years now and for one, it’s the first positive environment for law enforcement that I’ve been in not dealing with investigations and things like that. I’m very impressed with the organization as a whole and the leadership of the organization. We would love to spread it, as long as that’s OK with you guys, we would love an opportunity to take it to other communities.”

Other objectives of Camp Journey includes providing training and messages centered on values and traits including integrity, character, courage, grit, discipline and teamwork, educating students on issues they will face through adolescence and equipping them with skills to navigate these challenges and seeing first hand what school resource and law enforcement officers do.

The inaugural camp was free to students who attended in large part because of the summer feeding program. Kendrick is hopeful to keep the camp cost free in the future even in communities that don’t offer feeding programs.

“We were able to do it with no cost to the kids this year thanks to the feeding program at the intermediate school,” Kendrick said. “It’s something that we’re definitely looking to try and expand next year. We’re trying to answer those questions, say in the Chelsea community for instance without having the feeding program.”