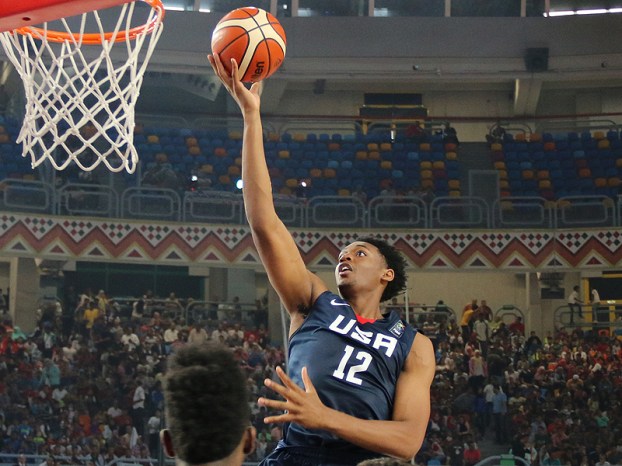 Austin Wiley, a former Spain Park basketball standout and current Auburn Tiger, was the only USA player to average a double-double as he helped lead the team to a Bronze Medal in the U19 World Cup. (Contributed/USA Basketball)

CAIRO, Egypt – Going into Saturday, July 1, former Spain Park standout and current Auburn Tiger Austin Wiley was looking to do something special by winning back-to-back gold medals as part of Team USA at the 2019 FIBA U19 World Cup in Cairo, Egypt.

Last year, on the U17 team, Wiley was able to bring home the gold as he and his teammates went on to defeat opponents by an average of 45 points per game before taking down Turkey 96-56 to win the World Championship on July 3, 2016.

Just like with his U17 team, Wiley and the U.S. started the World Cup off strong in 2017 by going 3-0 in pool play of Group D, where they were grouped together with Italy, Angola and Iran.

Team USA beat those three teams by an average of 46.7 points per game including a 108-48 dominating performance against Iran. Wiley had a slow start to the cup, however, only posting five points and eight rebounds in that first game.

He responded to his slow game one by posting his first double-double of the cup with 16 points and 16 rebounds against Angola. In the final pool-play contest, he posted another double-digit rebound performance with 14, but his nine points left him a point short of a second double-double.

Wiley and the U.S. carried their momentous play over into elimination play taking care of Mail 117-69 in the round of 16 and Germany 81-59 in the quarterfinals. Wiley played limited time in the 117-69 win over Mail to save his energy on the back of a second game in two days, but had another double-double performance in the win over the Germans posting 19 points and 10 rebounds, both team highs.

This led to a matchup with Canada in the semifinals, who came into the contest with an overall record of 4-1, while the U.S. held a record of 5-0. Despite the closeness in record, Team USA was still considered a heavy favorite to win.

Fate, on the other hand, had a different idea as the Canadians were able to pull off the upset and prove that the U.S. wasn’t unbeatable.

They went into the half trailing 45-42 after fouling Canada’s Louis King shooting a 3-pointer in a 42-42 game. He drained all three free throws and gave the Canadians an advantage heading into the half.

Canada continued to play from in front the entire second half as the U.S. just couldn’t get over the hurdle. Every comeback attempt they pushed came up short. With 5:48 left to play, they trailed 76-72 after cutting the lead to a manageable four points, but Canada went on a quick 6-0 run to go up by 10 with five minutes remaining.

The U. S. would get no closer than within six points the remainder of the way. Team USA crashed the glass grabbing 62 rebounds to outrebound the Canadians by nine, but shooting 32.9 percent from the field (28-85) and 58 percent from the free throw line (25-43) really did them in.

Wiley did have another strong performance posting another double-double with 13 points and a game-high 17 rebounds.

Canada went on to beat Italy 79-60 in the Gold Medal Game to prove they were not a fluke, while the U.S. rebounded with a 96-72 win over Spain to take home the Bronze Medal. Wiley posted eight points and eight rebounds in his final game with the U19 squad.

For the World Cup, Wiley averaged 10.3 points per game and a team-high 10.9 rebounds per game to average the only double-double on the team.

While he was unable to bring home back-to-back gold medals to the U.S., Wiley’s experience competing against the best players in the world will not just better his game at the college level with Auburn, but gives him a load of experience with and against future NBA talent as he looks to take that next step and compete on a Team USA in the Olympics someday.