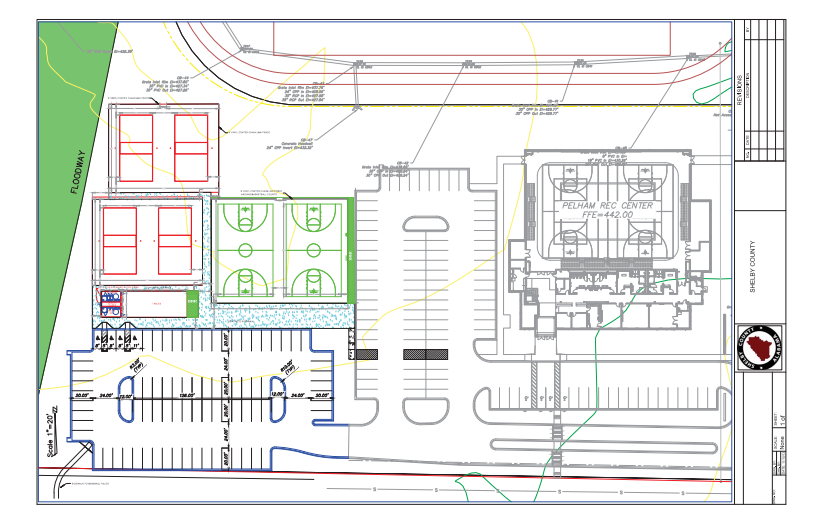 PELHAM – The Shelby County Commission is partnering with the city of Pelham to construct outdoor sand volleyball and basketball courts in Pelham City Park, adjacent to the recreation center that is currently under construction.

The Pelham City Council approved a resolution its meeting on Monday, July 10, authorizing Mayor Gary Waters to enter into an agreement with Shelby County to solidify the deal.

The project has a projected pre-bid budget of $975,000. The county is covering $650,000 of the cost and the city of Pelham picking up the remaining $325,000 and will be responsible for paying for any bid alternates selected by the city an agreed upon by the county and any unforeseen overages or additions associated with the project.

The scope of the project includes four sand volleyball and two full-size basketball courts lit with LED lights, a 60-foot pavilion with restrooms and outdoor showers and 83 parking spaces. The outdoor complex will be located adjacent to the planned trailhead that will eventually lead to Oak Mountain State Park.

“The city of Pelham will have the only LED-lit sand volleyball courts in Shelby County,” said Pelham Parks and Recreation director Billy Crandall. “Once it’s completed, this area will be a great gathering place for the city.”

Crandall said residents will be able to rent the pavilion to host private events.

Shelby County manager Alex Dudchock said the goal is to begin the bid process in August and start construction in September. Once construction begins the project is expected to be complete within 120 calendar days.

Dudchock said the project falls in line with the county’s plans to reinvest lodging taxes into tourism initiatives.

“This definitely ties in with our tourism initiatives,” Dudchock said. “This project will open the door for high school and collegiate sand volleyball tournaments and basketball tournaments.”

Crandall said there would also be opportunities for adults to participate in sports activities and leagues.

Dudchock said the location of the project is ideal because of the other projects underway in Pelham City Park and because of its proximity to Pelham’s lodging options on and near Cahaba Valley Road. With the rec center, new middle school and library being built so close by, extra parking space will already be in place.

“We don’t envision another complex being this convenient when it comes to proximity to lodging,” Dudchock said.

When the facilities aren’t being used to host events, they will be available for residents to enjoy.

Crandall said this project would’ve been completed on a smaller scale if the city had not partnered with the county.

“We probably would’ve had two sand volleyball courts and one basketball court and less parking, which wouldn’t have been suitable for sand volleyball tournaments,” he said. “They require a minimum of four courts and they must be lit. We will bring more people and more events this way.”

Crandall said the city and county have worked together on projects before and they have a great relationship.

“This partnership has been an honor,” Crandall said.