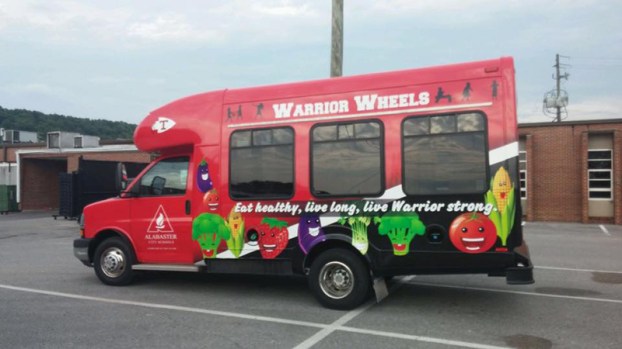 The Warrior Wheels program allows ACS to distribute meals to sites throughout the city each day. (Contributed)

ALABASTER – The Alabaster City School System has seen an increase in participation for the month of June through the summer feeding program.

The program, which started on June 5 and will end July 29, provides free breakfast and lunch to children, and offers meals for adults for a few dollars each meal.

According to Alabaster Schools CNP Manager Heather McDermott, a total of 27,160 meals were served during the month of June.

McDermott attributes part of the increase in meals served to the addition of three new sites through its Warrior Wheels program, which allows ACS to distribute summer meals to sites throughout the city each day.

“We are trying to get the food to more kids each day, so we are trying to spread out the locations,” McDermott said. “All of the sites are run by volunteers, and I can not say enough about them and the work that they put in to make sure these kids are fed.”

McDermott said some sites throughout the city are more popular than others, with the most popular site being the YMCA, with about 200 lunches served each day, and roughly 200 snacks provided.

Buck Creek Park is also a popular location with about 50 to 80 kids at the site each day.

McDermott said a common misconception is that children must be residents of Alabaster to receive a free meal, but the program is open to any child 18 and younger, who can eat for free.

“A lot of kids stay with their grandparents during the summer and they might not be from Alabaster, but they can definitely still participate,” McDermott said. “It is not just for Alabaster residents.”

Adults can purchase meals at Meadow View Elementary and Thompson Intermediate with the cost being $2 for breakfast and $4 for lunch.

In 2015, the ACS Child Nutrition Department applied for and received a $50,000 grant from the Community Foundation of Greater Birmingham and the United Way of Central Alabama to purchase a new bus to deliver the meals to sites such as Kids First Awareness Community Center, the Alabaster YMCA, and the Episcopal Church of Alabaster.

2016 was the first year for the school to use the Warrior Wheels program, and McDermott said the number of meals provided to area children increased greatly.

“We served 47,000 meals last year, and we are hoping to beat that number this year,” McDermott said. “This is all for the kids, and we hope they can benefit from this program as much as possible.”

McDermott said there is still time for those interested to participate in the program and receive meals for the remainder of the summer.

“If there are people that are interested in participating, there is still plenty of time,” McDermott said.

For more information about the program or site locations, visit alabasterschools.org or contact McDermott at 663-8460.