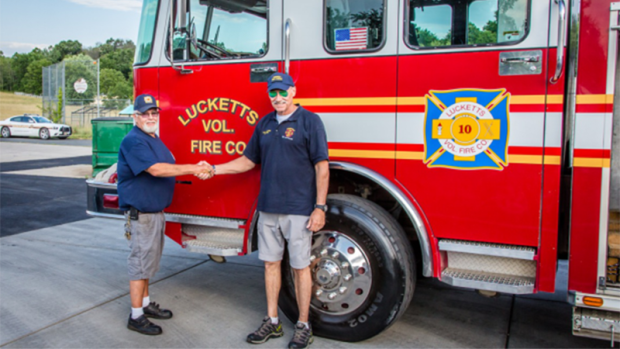 BRIERFIELD – Brierfield Fire and Rescue recently acquired a rescue truck from a fire department in Virginia.

BFR Board President Jimmy Latham said the department was the recipient of a rescue pumper from Lucketts Volunteer Fire Company in Loudon County, Va.

“A lot of larger fire departments tend to donate to a department that is less-funded because it would be difficult for us to purchase a truck that costs that much,” Latham said. “ In turn, we will also donate one of our older trucks to a smaller department, and these trucks just get worked down the system.”

The truck is a 2003 Spartan with a Salisbury rescue body, and is equipped with a water tank with a high volume pumping capacity, multiple compartments for rescue equipment including airbags to lift heavy objects, pre-connected extrication equipment, and a large winch on the front for pulling or as an aid to stabilizing vehicles.

The department has had the truck for about two weeks, according to Latham and firefighters are receiving a six-week training on the truck.

“There is a lot of equipment on the new truck that deals with a wreck situation,” Latham said. “We want everyone to know how to use it. The last thing we would want to happen is for someone to just jump up there and drive the truck off to a scene, either having an accident getting there, or not know how to access and use the equipment once they have arrived.”

Brierfield has a current ISO rating of 4 and has 14 active volunteer firefighters, all fully trained, and roughly 12 auxiliary and administrative volunteers.

Latham said he department responds to non-transport EMS and fire calls, and handles roughly four to five EMS calls per week, with about 15 fire calls per year.

Latham said the department covers a 10-mile radius, and has mutual aid agreements with all surrounding fire departments.

The department is part of the First Battalion of Shelby County, which is an automatic mutual aid group consisting of six volunteer fire departments including Brierfield, County 17, Dry Valley, Montevallo, Pea Ridge, and West Shelby.

“We are really thankful to have it, and look forward to being able to use it,” Latham said.

For more information about Brierfield Volunteer Fire and Rescue, contact 665-3060.