MONTEVALLO – For Melanie Poole, Montevallo is not only her home, but it is the place that helped shape her into the person she is today. 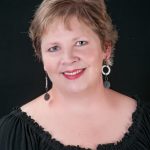 “Montevallo was my first ‘home away from home,’” Poole said. “It is where I grew up, mentally and intellectually, and became a leader. Montevallo gave me the guidance, as well as the opportunity and the freedom, to shape myself. It was an environment full of role models, comrades, and confidantes, and it is where I blossomed.”

Poole said she was humbled and honored to receive the recognition, and it held a special meaning when she found out she had been selected by the University of Montevallo.

“There are so many individuals deserving of the Good Neighbor Award, and the fact I was selected means the world to me. I have always tried to give back as I was able, with my time, talent, or treasure.”

Poole, a 1986 graduate of the University of Montevallo, has served as the communications officer for the American Village since 2011, according to a press release submitted from UM.

Recently, when the University announced plans to build a new Center for the Arts, Poole was the first to step forward with a major gift.

Poole has also been a long-time advocate of UM and her involvement in community service is “extensive,” according to the release.

Poole is the founder and president of the UM Friends of the College of Fine Arts advisory board.

While there are many things Poole appreciates about her hometown, she describes the people as the main reason Montevallo is special to her.

“Montevallo is more than quaint brick streets that eat the heels of your best dress shoes,” Poole said. “It is more than the juxtaposition of historic buildings and state-of-the-art technology. It lives and breathes because of people, the professors, the staff, the administration, the alumni, the students and the townspeople. They each play a part in the story of Montevallo.”

From Staff Reports BIRMINGHAM – A federal judge sentenced a Birmingham man to 20 years in prison for distributing fentanyl,... read more