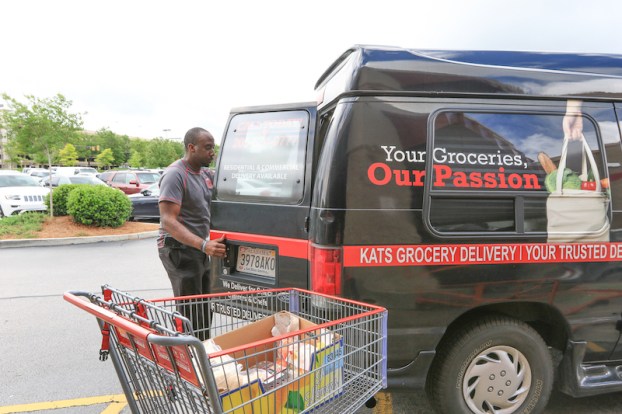 Maurice Mercer, a founding member of KATs Grocery Delivery, a business inspired by his mother, loads groceries into the KATs delivery van.

At a dim point in her life, Birmingham resident Kathryn Jenkins had a bright idea.

Jenkins, who was diagnosed with an autoimmune disease called scleroderma near her 50th birthday, started having trouble with tasks like grocery shopping.

She enlisted the help of her son, Maurice Mercer, to pick up and deliver her groceries to her home.

“By her death, she was on full-time oxygen,” Mercer said. “She would like to go shopping, but she could barely carry a gallon of milk. She would get out of breath. It was more a chore than something that someone would find pleasant.”

He said Jenkins was not eligible for a meal delivery service because of her age.

Mercer, who lives in Shelby County and serves on the Pelham City Council, started commuting to Birmingham each week to deliver her groceries.

“What a task, but when it’s your mom, you get it done,” he said. “We both agreed that, hey, this would be a great service. She would text me her list. We talked about this being a great idea.”

A grocery delivery service: The concept, although simple, could fill a void for people like Jenkins. It could make a difference in the lives of seniors, veterans and people unable to leave their homes because of illness or other reasons.

It could also alleviate the strain placed on people, like Mercer, who are tasked with providing for a loved one while juggling their own schedules.

“My main concern was that she had everything she needed,” Mercer said.

Mayoclinic.org defines scleroderma as a group of rare diseases that involve the hardening and tightening of the skin and connective tissues, which are the fibers that provide the framework and support for the body.

Before the effects of the disease forced her to retire, Jenkins was a nurse at UAB Hospital.

She earned her master’s degree in nursing from Columbia University in New York.

Jenkins passed away in November 2013, earlier than Mercer and his family expected.

At that point, Mercer felt compelled to act on his and Jenkins’ idea of a grocery delivery service.

“I really felt like the Lord was putting it on my heart to get it started for seniors,” Mercer said.

Thus, Karing, Agape and Transitional Services Inc. – also known as KATs Grocery Delivery – was formed in memory of Jenkins, whose nickname among family and friends was “Kat.”

“She helped create the idea,” Mercer said. “The unfortunate part is we never really put the paperwork or moved forward while she was living.”

Mercer, the company’s current president, and his wife Amanda are founding members of KATs, which incorporated in August 2014.

“Competition has brought more awareness that grocery delivery is a good concept,” he said. “We welcome that competition.”

The KATs staff consists of as many as five part-time workers. The number fluctuates according to need.

“We’ve been lucky enough to have recently brought on some additional hires,” Mercer said. “The growth we’re seeing, I could see that number easily gravitate. Nobody is full-time at this point, but we are always looking for somebody to add.”

All employees undergo a background check and have insurance.

In addition to home deliveries, KATs handles commercial deliveries for local chefs and caterers. Between Sunday and Thursday, KATs delivers more than 300 meals that Birmingham-area chefs have prepared and sold through their websites, Mercer said.

“They use KATs to get these meals out to consumers,” he added. “That has been a blessing for us as a small business to be able to move in a different direction. In my mind, it’s still helping people like my mom. They have a full meal cooked; they just have to warm it up.”

KATs is headquartered in Alabaster and operates one delivery van.

“We’re looking to expand that to a second van sometime this summer,” Mercer said.

KATs Grocery Delivery is accredited by the Better Business Bureau and was a 2017 nominee for the Greater Shelby County Chamber of Commerce’s Small Business of the Year awards.

After hitting rock bottom, Jeff McDowell picks himself up and starts a security company Story by Emily Sparacino Photographs by... read more