PELHAM – A Florida man is being held in Shelby County Jail on a $1.5 million bond after he allegedly traveled from Florida to Pelham, with his 7-year-old daughter in tow, to complete a drug transaction. 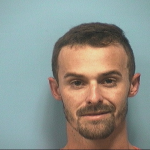 Investigators with the Shelby County Drug Enforcement Task Force concluded an undercover narcotics investigation in the early morning hours of Friday, July 14, that resulted in the seizure 57.84 grams of methamphetamine in the area of U.S. 31 and Alabama 119 in Pelham.

The investigation resulted in the arrest of 27-year-old Ryan William Leacock, of Milton, Florida.

According to the SCDETF, Leacock allegedly transported the above-mentioned methamphetamine from Florida to Pelham to meet with an undercover narcotics investigator.

As investigators made contact with Leacock around midnight, it was discovered that he brought his 7-year-old daughter with him from Florida as he allegedly attempted to sell approximately $4,000 worth of methamphetamine.

Leacock’s daughter was taken into care by Shelby County Department of Human Resources and transported to Children’s Hospital for a wellness check. Leacock was arrested and charged with child endangerment, trafficking methamphetamine and possession of drug paraphernalia.

As of Friday, July 14, Leacock remained in Shelby County Jail on a $1.5 million bond.

“My heart breaks for the young child and I am incredibly grateful for the quick and passionate response of the Shelby County Department of Human Resources,” said Lt. Clay Hammac, commander of the SCDETF. “Exposing a child to a life of drug trafficking and drug deals is despicable.”