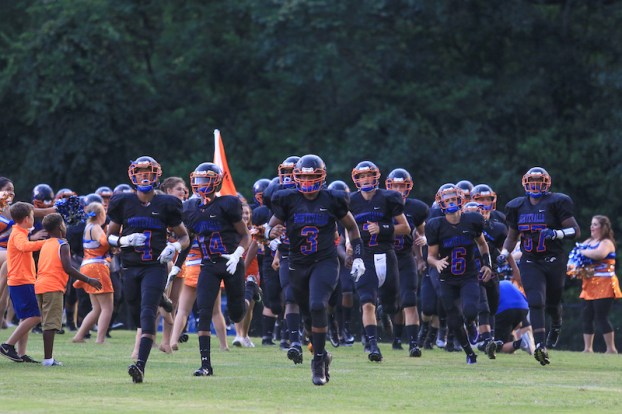 Montevallo will enter the 2017 football season as a favorite to win Class 3A Region 4 along with Gordo thanks to the amount of returning team leaders. (File)

Montevallo may be a small town in the southernmost part of Shelby County, but their football team over the past two seasons has done more than enough to bring plenty of attention to one of the county’s hidden wonders and mark our second way-too-early football prediction team of 2017.

The last two football seasons have featured a total of eight All-State nods and a combined record of 19-5, all under two different head coaches. In 2015, the Bulldogs reeled off nine wins on their way to a 9-3 record, which was second all time in the school’s history.

Once then head coach Andrew Zow decided to move to Calera to replace Wiley McKeller, Montevallo was on the hot seat having to find a new coach to replace the former Alabama quarterback.

That coach came by the name of Brandon Wilcox. There was plenty of reason for skepticism with a new coach coming in, but Wilcox put those doubts to rest quickly as he led the Bulldogs to a school-tying record for wins by going 10-3 in 2016.

In his first season as the head coach, Wilcox showed what the expectation is, but going into his second season he doesn’t just want to meet that criteria, he wants to exceed those expectations.

That may not be such a lofty goal for this 2017 Montevallo squad as yet again several of their top players from the previous year are returning for a team that is looking to make history by winning 11 games and making a run at the 3A state championship.

There are a two massive losses to do with, but while they are big, there’s only two meaning the majority of the team is still intact and somebody is waiting to emerge out of the shadows at each position.

Quarterback Zac Oden and wide receiver/defensive back Tre’Shawn Brown are those two guys that have graduated and won’t return for the Bulldogs. When I say these guys were good, that may be an understatement, as both were All-State players the past two years for Montevallo in the 3A division.

Oden threw the ball 392 times during his senior season completing 221 of his pass attempts for an unbelievable 3,210 yards and 32 touchdowns passing. Brown was on the receiving end of 72 of those passes and made the most of them going off for 1,100 yards and 11 touchdowns.

While going over 1,000 yards as a receiver is a monumental accomplishment, Brown also flipped to the other side of the ball to play free safety where he picked up 108 tackles, 14 tackles for loss and one sack to complete his truly special senior season.

As I said, replacing those two guys will be a very tall task, but there are guys capable of making the drop off less severe than it could be on most teams.

Starting at quarterback, Jay Sullens will look to take the reins in 2017 as a junior. Sullens brings a different style of play to the table as he is an athletic guy that can beat you with his legs or his arm. Clearly this is an offense that likes throwing the ball after letting it fly 392 times last year, and while that will still be an integral part of the offense, Sullens’ legs will come into play on multiple occasions as well.

Helping him transition into the starting quarterback role, will be second two leading receivers off of last year’s team. Daqwan Bryan is back for his senior season and wasn’t far off of Brown’s unbelievable stat line last year.

Bryant caught 62 balls for 960 yards and nine touchdowns as a junior. He not only brings his dynamic hands back to the table, but also, like Brown, will play both sides of the ball. Last year defensively, Bryant nabbed 81 tackles, nine pass deflections and three interceptions.

Tavarius Holman is also back at the position and brings with him 365 yards and six touchdowns receiving from the 2016 team. Those two guys and an extremely athletic Jabrian Sullens will give Jay Sullens three great targets to look for.

Those offensive playmakers as well as an offensive line that features three returning starters and other skill position players that have made waves are already enough to make a fan base excited for the 2017 season, but what they return defensively is why I am so high on this team.

Demetrius Smith and Tyler Olds, both All-State guys from last year, are back to place fear in the minds of opposing backfields for the second consecutive year.

Smith, a defensive lineman, destroyed opposing offenses last year combining for 105 tackles, 23 tackles for loss and 13 sacks. His presence alone on the defensive line is enough, but two other returning starters in Will Howell and Boston Bush will make this D-Line one of the most dangerous in the state.

Olds will anchor the linebacker position, while also splitting time at running back this year. If you thought Smith’s stats were impressive, try not to let your jaw drop when reading Olds’ stat line from 2016. As just a sophomore for the Bulldogs, he racked up a team-high 153 tackles, 22 tackles for loss, six sacks, three fumble recoveries and one interception.

Having he and Smith back, accounting for that many tackles, will make this defense a nightmare for the upcoming season. Jayvion Seay will also return to the outside linebacker spot to add more experience.

Bryant and Holman both got snaps in the secondary last year and bring back a combined four interceptions and Bryant’s 81 tackles. Those guys cap off a team that is stacked at every positon.

This team, along with two or three others, have a legitimate and strong chance to compete for a state championship in 2017. With the amount of talent they return on defense, which is where championships are won, they will be right in the thick of every game with a chance to win.

They are in an area where Gordo is a tough out to win a region championship, but after that there isn’t much to scare Montevallo, meaning they should easily find themselves in the playoffs.

All it will take for this team to make that next step and create a historic season that features at least 11 wins is some strong quarterback play. While there will be some rocky times for Jay Sullens due to the learning curve in front of him, by the end of the season he will be like a well-oiled machine.

I easily see Montevallo making it back to the playoffs and winning at least 10 games for the second consecutive season as long as they stay focused and want it as bad as they seem to this summer.

By ALEC ETHEREDGE | Sports Editor PELHAM – We are inching close to Aug. 24, which also means we are... read more