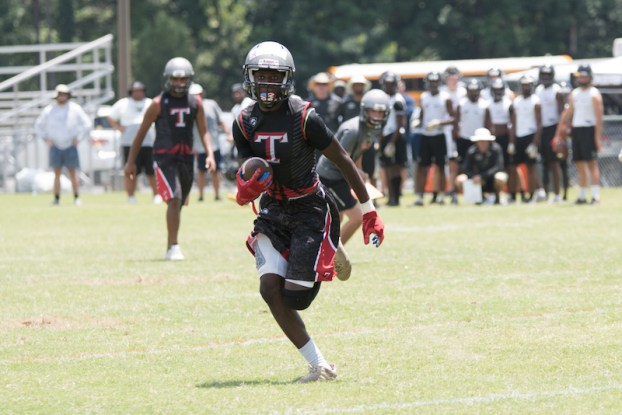 Thompson made it all the way to the semifinals of the 2017 USA Football 7-on-7 National Championship series where they fell 27-20 in overtime to host Hoover. (Reporter photo/Keith McCoy)

HOOVER – A total of 38 of some of the best high school football programs from around the country made their way to Hoover for the 2017 USA Football 7-on-7 National Championship series from July 13-15, two of which were the Spain Park Jaguars and Thompson Warriors.

Both are a part of Class 7A Region 3 in the state of Alabama, along with tournament host Hoover, placing three of the state’s best teams in one region and giving us an exciting preview of what to expect as the 2017 football season approaches.

This year’s tournament included teams from five different states — Alabama, Connecticut, Georgia, South Carolina and Tennessee — pitting some of the best talent from all over the country against each other.

“This is a lot of fun,” Spain Park head coach Shawn Raney said of the event. “This is a big deal to come over here and see kids from all over the country. We get to see different schemes offensively and defensively from teams in South Carolina and Georgia, it’s big and we’ve really enjoyed it.”

The tournament kicked off with pool play on Thursday, July 13, which continued until early on Friday afternoon.

The Jags had a nice showing in pool play going 4-1-1 with wins over Northridge, Daphne, Austin and Lassiter, GA; a loss to Hewitt-Trussville and a tie with Opelika. That strong performance was good enough for a second place finish in Pool A, which gave them a bye until Saturday’s elimination round.

Thompson also had a nice pool-play performance going 4-2 to finish in a tie for third in a very tough Pool D. The Warriors started the tournament with a 40-6 thumping of Oakland, TN and then went on to beat Spanish Fort and Valdosta to start pool play 3-0 after day one.

They came back on Friday and lost two tough games to Brunswick, 13-11, and Colquitt County, 12-11, both of which are Georgia teams. They responded with a 31-6 win over New Canaan, CT to seal their bye to championship Saturday.

Spain Park came into Saturday as the eight seed and faced off against Boiling Springs, SC, who was the 25 seed. The Jags gave a strong effort, but fell 32-19 to Boiling Springs, which turned out not to be to shabby of a loss once Springs went on to win the event over host Hoover by a final of 29-17.

“In one of these games, it’s going to be ebb and flow, up and down,” Shawn Raney said. “When things are going bad, you pay attention to your kids to so who will try to change it.” 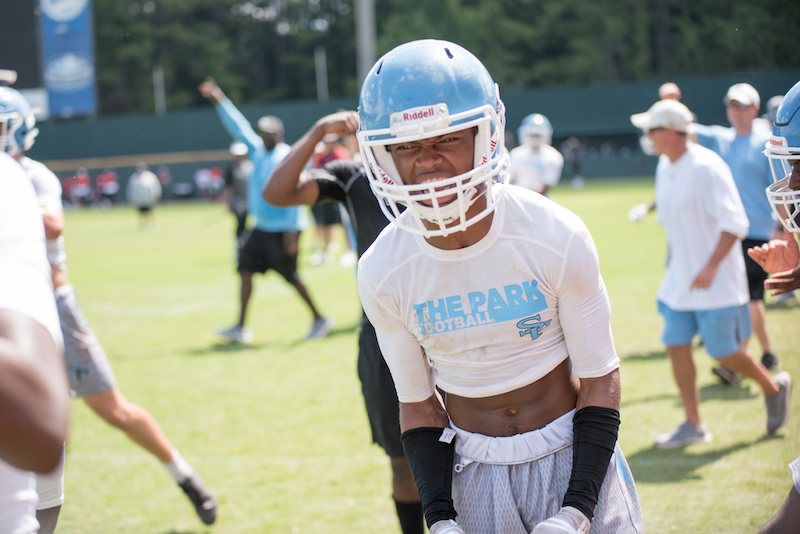 And change it they did. With their loss, the Jags were eliminated from the running for a championship, but they got to play in a consolation game against Gadsden City who they start the 2017 season with on Aug. 25.

It gave Raney a chance to play some of his backups and they performed extremely well, which has to excite the head coach when it comes to depth this season. The Jaguars went on to take down the Titans 22-17 to close out a hot and exhausting tournament as they finished with an overall record of 5-2-1.

“It’s hard to get kids playing in this heat for six straight games and keep them motivated,” Raney said. “It’s probably the best we’ve ever done when we come over here. Usually we’re a roller coaster of up and down, but I thought these kids fought their tail off.”

Thompson, who came into the tournament with a 14-2 record in 7-on-7 competitions this summer and two championships in just two events, continued their successful summer run.

While they were down a few receivers, Ahmad Edwards and Kyle Smoak stepped up to help out quarterback Taulia Tagovailoa, and the defense played lights out as the Warriors took down Austin, 20-10, Jeff Davis, 33-6, and Har-Ber, AR, 23-20, to reach the semifinals against defending 7A state champion and region foe Hoover.

“I thought Smoak played really well,” Thompson head coach Mark Freeman said. “Coming out of Montgomery last week we were a little beaten up and weren’t sure what we were going to do coming into this event, but God had a plan.”

Most 7-on-7 action is entertaining simply because there is a lot of offense, but throw in two region rivals facing off against each other and you could just tell it meant more for Thompson and Hoover heading into the semifinals, much less accounting for the fact that a trip to the championship was on the line.

Both teams battled back-and-forth to an eventual 18-18 tie, but with Hoover having the ball with under a minute to play, a score would have all but insured their win. The Warriors, however, buckled down defensively and forced a three-and-out, which gave them a 20-18 lead. 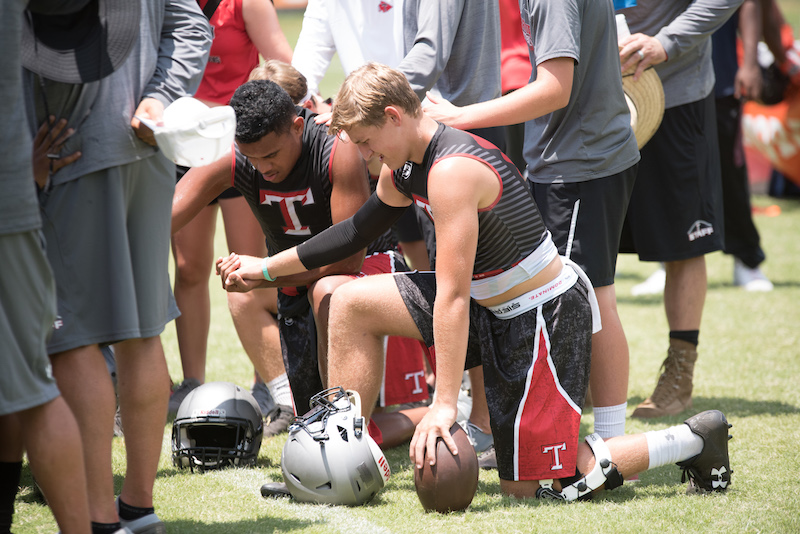 Thompson kneels down for a prayer after one of their many games.

With 20 seconds left to play, and the Bucs out of timeouts, all Thompson had to do was complete a pass and stay in bounds. Instead, they let three passes fall incomplete, the last with two seconds, which allowed Hoover to tie the game forcing overtime.

Hoover went on to score on third down of their first overtime drive to take a 27-20 lead, which forced the Warriors to have to do the same. Thompson got within five yards of the end zone but on third down a pass was dropped in the end zone to end the game.

Despite the tough loss, Freeman and the team didn’t dwell on it, knowing their performance was a strong one that could give them plenty of things to build off of.

“I’m very proud,” Freeman said “We preached coming out here that it was about the opportunity and the play, not about the outcome. It hurts to lose a game like that, but when you get down to this part of a tournament like this, you’re playing good teams. I told the kids, I don’t want any disappointment over this.

“You don’t want to lose, we hate losing, but at the end of the day, I’m going to go home and be proud of my kids.”

There is absolutely no reason Freeman and the team shouldn’t be proud. They have now built their 7-on-7 record to an unbelievable 21-5 with two championships and a semifinal appearance in arguably the most difficult 7-on-7 event of the season. If anything, Thompson and Spain Park both, should be more excited for the 2017 season than when they arrived at the Hoover Met on Thursday afternoon.

By ALEC ETHEREDGE | Sports Editor PRATTVILLE – For the second time in a span of three days, the Thompson... read more