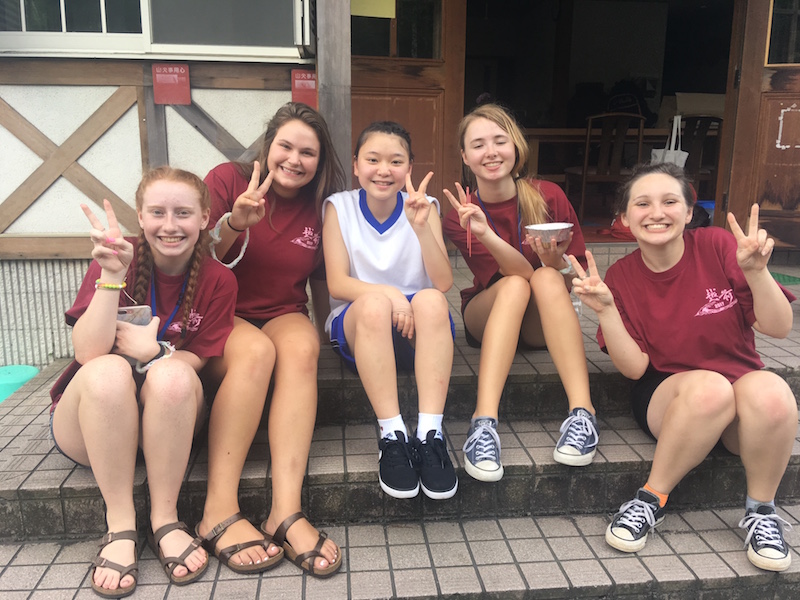 Montevallo’s youngsters are so popular in its Japanese sister city that Echizen Town had to hold a lottery to select the families who would host the four middle school girls who visited earlier this month.

Cindy Boyd, one of the group’s chaperones, and her daughter Chloe made the trip, “and we would do it again tomorrow,” Boyd said. The group was the ninth batch of Montevallo youngsters to go to Echizen Town in an exchange that brings visiting Japanese children to Montevallo in alternate years.

For Chloe the experience was also a reunion. One of the first Japanese girls she saw was Aki Shimizu, the girl who stayed with the Boyd family during her visit to Montevallo last year. She and her classmates were eager to return the hospitality.

“I can’t tell you how wonderful and welcoming they were,” Boyd said.  “The moms treated our girls just like part of their own families.”

“Family” is a theme running through life in Echizen Town, she said, noting that children spend long hours in school, but it is not time that is begrudged.

“School is like an extension of the family—there is no such thing as detention in the schools because the children are so well-behaved,” Boyd said. “The day we arrived, they were so excited to see us. The children came out of their classrooms, smiling and introducing themselves.”

For Chloe, a favorite memory was joining a music class singing John Denver’s “Country Road” in English. Both said food was another highlight—even school lunches—and they both delighted in the sushi-making class.

Although Chloe’s host family’s daughter, Yui, studied English in school, the girls often reached a comprehension impasse, “and then we used Google ‘Translate.’”

The girls communicated through social media before the trip, which eased some of the strangeness.

And the boys? Chloe smiled. “The high school boys said we were ‘cute,’” she said, “but the middle school boys called us ‘beautiful.’”

Cindy Boyd shook her head in bewilderment when she explained why only four students made the trip this year. “We had a few who had passport problems, but there are some who could have gone and just didn’t want to leave home. Some were afraid, I think.”

That was a puzzler, she said, “because Japan is the safest country in the world. There is virtually no crime. The families take great care of our children, and, when we parted to go home, there was not a dry eye—even the fathers had tears in their eyes.”

Boyd said she would like to see more youngsters make the trip in two years and more families queue up next year to host one of the Echizen Town youngsters.

“If you are interested in hosting,” she said, “just call city hall. The mayor’s office can answer any questions you have.”

And, kids? Get that passport application in the works. A whole world and a Sister City await.