PELHAM – Pelham police officers arrested a 31-year-old Hoover man on Tuesday, July 18, in connection to a theft at a local construction site. 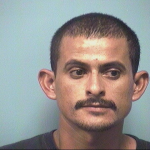 Miguel Gutierrez-Zavala, who lists an address on Alpine Village in Hoover, is charged with third-degree theft of property and was being held in the Shelby County Jail on $5,000 bond as of Wednesday, July 19.

According to police reports, Gutierrez-Zavala allegedly burglarized a construction site, stealing multiple pieces of equipment, on Wednesday, July 12, around 5:30 a.m.

Third-degree theft of property is a Class D felony, punishable by one to five years in prison and up to $7,500 in fines upon conviction.

According to court documents, the stolen items exceeded $500 in value, but did not exceed $1,499.

On July 13, the Pelham Police Department posted photos on its Facebook page showing images of a black Chevy Colorado that was captured on surveillance video arriving and leaving the scene of the crime. The public was asked to help identify the suspect.

“The truck has a dealer tag, chrome fender flares, a toolbox and an image over the front windshield,” the PPD Facebook post stated. “The vehicle was missing its rear bumper.”

After the suspect’s arrest, the PPD thanked the hundreds of residents who shared their July 13 Facebook post.