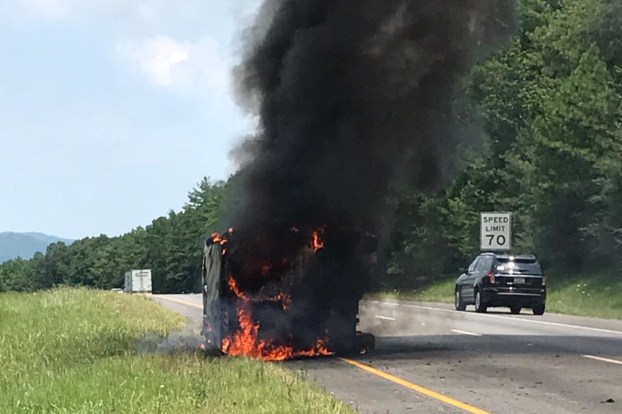 Police responded to an accident involving a truck belonging to the Frio’s Gourmet Pops franchise in Alabaster that was overturned and on fire. (Contributed/Michael Weidenbach)

ALABASTER – The Alabaster Police and Fire Departments responded to an accident on I-65 Northbound near mile marker 239 at around 1 p.m. on Thursday, July 20. According to the APD, the wreck involved one overturned vehicle that caught on fire.

“The truck is a total loss, like a ‘melted marshmallow’ kind of loss. It’s been a big piece of our puzzle, and I will miss it,” Weidenbach wrote in a post on Facebook.

Weidenbach said he was merging onto the interstate while driving to a catering event when the truck fishtailed and overturned.

“It started to catch fire when I was still in the truck and I climbed out as fast as I could,” Weidenbach said.

Both travel lanes on I-65 were closed for about 45 minutes, and traffic was directed through the emergency lane.

No injuries or deaths were reported, and Weidenbach credited that fact to Alabaster local Adam Lowery and his business, Diesel Unlimited.

“I was very, very lucky. I’m glad that my friends at Diesel Unlimited had put in the safety features that saved my life,” Weidenbach said.

While he described the truck as “iconic” to the community, Weidenbach said he is currently looking into replacing it with another truck or a trailer.

“Serving the events that happen around the community, you have to be ready for anything,” Weidenbach said. “We’re not going to let this get us down.”