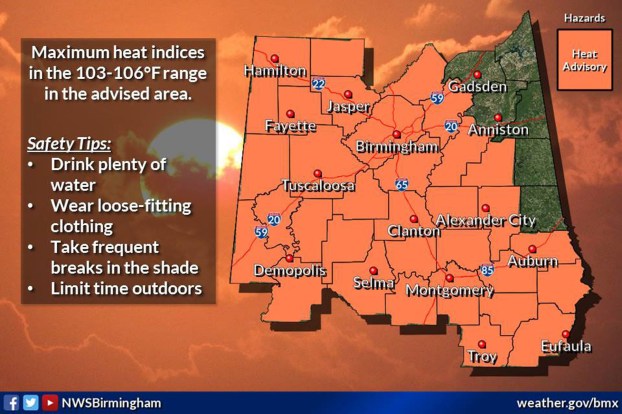 A heat advisory was issued for the entirety of Shelby County and other parts of central Alabama from July 21 through 23. (Contributed)

The US National Weather Service of Birmingham recently issued several heat advisory warnings for the entirety of Shelby County and other areas in central Alabama.

Goggins said heat advisories involve several different factors and are only issued once the heat index in a certain area reaches over 105 degrees Fahrenheit.

“It takes into account the air temperature and the humidity,” Goggins said.

While the Weather Service does not issue heat advisories before 48 hours in advance, Goggins said they could issue another one on Thursday, July 27.

There were no reported injuries or deaths during last week’s heat wave.

Goggins added that it is also important to wear sunscreen. She also urged people to know the differences between heatstroke and heat exhaustion.

Symptoms of heatstroke include an elevated body temperature, a rapid heart rate, loss of consciousness and reddened skin. Symptoms of heat exhaustion include weakness, heavy sweating, a weak but faster heart rate, neasea or vomiting and cold, clammy skin.

“Those are the two biggest health hazards related to heat,” Goggins said.