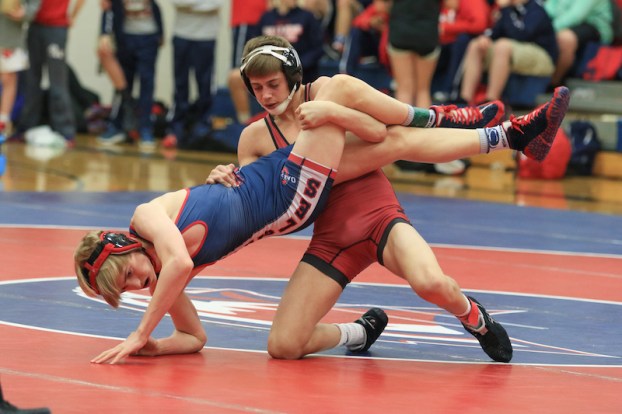 Sam Latona, pictured in a wrestling match earlier this year with Oak Mountain, became Alabama’s first ever Junior National Champion as he won the 106-pound title in Fargo, North Dakota. (For the Reporter/Dawn Harrison)

FARGO, N.D. – Three Thompson wrestlers continued the storied dynasty the Warriors have started over the last several years when they traveled to Fargo, North Dakota, to take part in the 2017 Cadet and Junior National Championships.

Sam Latona, Gabe Hixenbaugh and Dylan Lesueur didn’t just take part in the event, they all finished inside the top five of their respective event.

Latona, who has been ranked No. 3 nationally in the 106-pound weight division by Flowrestling.org, had the strongest showing of the group. A rising junior with the Warriors, Latona competed in the Junior Freestyle and Junior Greco competitions and brought home the two highest finishes by a Thompson wrestler at the event.

He didn’t just have two high finishes in the event, but he picked up the state of Alabama’s first ever Junior National Championship by winning the Junior Freestyle title to add to his already impressive resume.

Latona took down Christopher Trelli of Bristol, Connecticut 12-2, 5:07 in the title fight. His run to the championship was rather dominating as he beat Yonas Harris of Germantown, Maryland 10-0, 1:51 in the quarterfinals and Anthony Talamonti of Manteno, Illinois 16-6, 5:44. 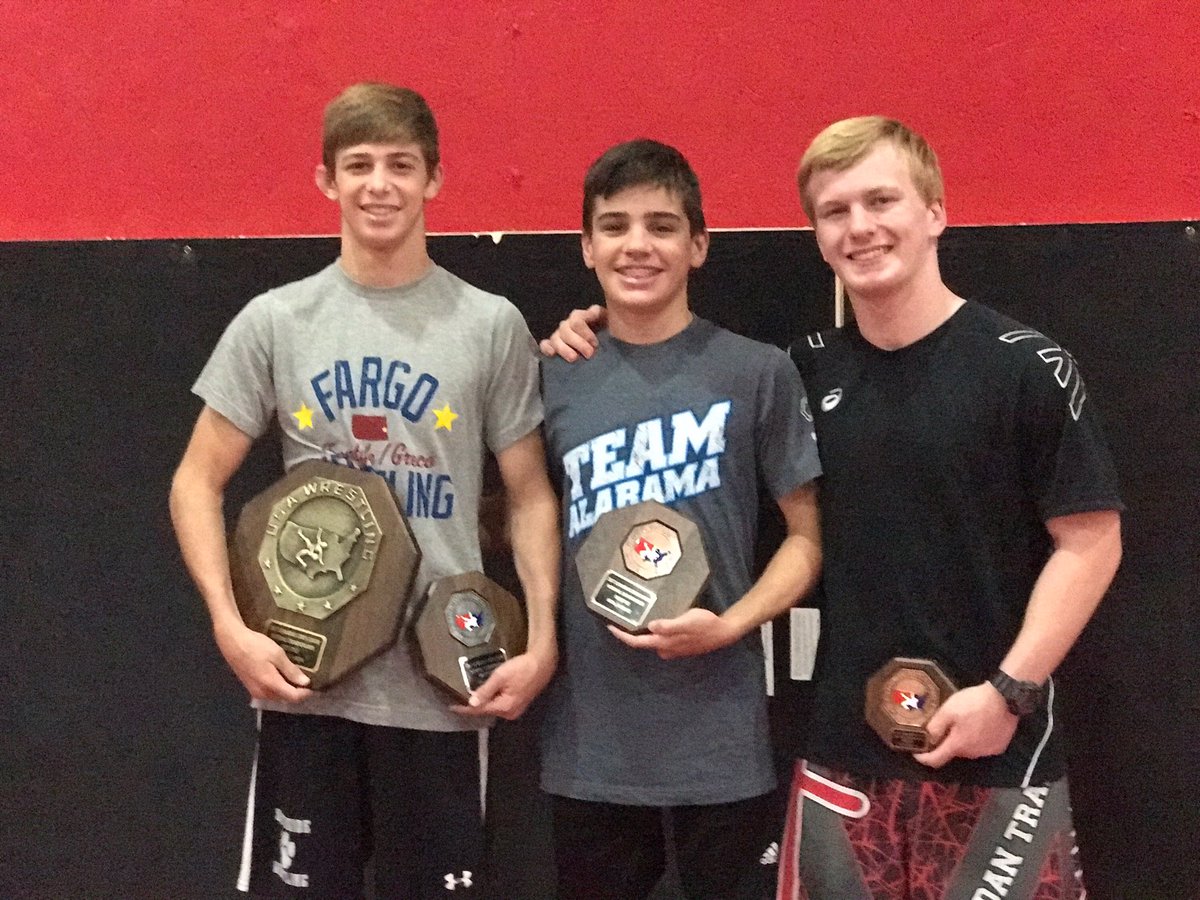 All three of the Thompson wrestlers that competed in the event are pictured with their trophys including Latona’s championship and runner-up trophy. (Contributed)

As if that championship wasn’t enough, he followed it with up with a runner-up finish in the Junior Greco event. Latona ran through his quarterfinal and semifinal opponents 10-0 and 5-0, respectively to easily advance to the finals yet again.

This time around, Brendon Garcia of Pueblo, Colorado got the better of Latona in an 11-0, 5:51 victory. There was no questioning, Latona’s will to sweep both events, but to finish as a champion and runner up in both events he competed in was an impressive and extremely rare feat.

Hixenbaugh might have been overshadowed by Latona’s dominance, but it wasn’t by much as the strong Thompson Wrestler was able to make it to the semifinals in the 126-pound weight division of the Cadet Freestyle tournament.

In the quarterfinals, Hixenbaugh took down Travis Mastrogiovanni from Sussex, New Jersey 11-0, 2:03 to earn his spot in the semis where he took on Joshua Saunders.

Saunders reigns from St. Louis Missouri and proved to be just a tad too much for Hixenbaugh as he took down the Warrior wrestler 10-0, 3:24 to end the chance at having at sweeping both the Junior and Cadet Freestyle championship. Hixenbaugh did however take home a fifth place finish in the overall standings.

Lesueur added to the depth of strong finishes for Thompson as he grabbed a third place finish in the overall standings of the Cadet Freestyle. He was able to place third in the 88-pound division thanks to a strong effort throughout the tournament.

Those three guys were all named All-Americans and with all three of wrestlers returning to Thompson for the 2017 season, it is clear that despite their state championship run ending the past couple of years, they are very much on the verge of being the overall best team in the state yet again with so much young talent proving itself on a national level.

By ALEC ETHEREDGE | Sports Editor HOOVER – A total of 38 of some of the best high school football... read more