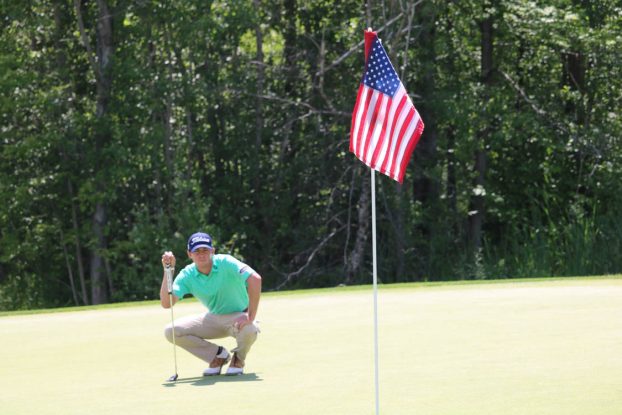 Michael Johnson continued his strong play at the Pinnacle Bank Championship picking up a tie for second. It marked his highest finish in a Web.com Tour event and put him 51st on the money list. (Contributed/Kevin Prise, PGA Tour)

ELKHORN, Neb. – A few weeks ago at the LECOM Health Challenge, Michael Johnson picked up his highest finish on the Web.com Tour, a tie for 12th. With golf being a game of momentum, it was clear at that time, Johnson was ready to make his first strong move on the Tour.

After being cut in 10 of his first 14 events on the Web.com Tour and a season-high finish of a tie for 25th, his first top 15 finish has already led to a momentous swing. He followed that strong showing at the LECOM Health Challenge with a T19 finish at the Utah Championship and new career-high finish in his most recent tournament at the Pinnacle Bank Championship in which he not only finished inside the top 10 for the first time, but in a tie for second place on Sunday, July, 23.

Johnson, a former Spain Park and Auburn standout, finished the tournament at 13-under with three other golfers.

The second place finish comes on the one-year anniversary of Johnson’s professional debut, where oddly enough, he finished second. In 2016 at the PGA Tour’s Barbasol Championship, Johnson finished in solo second and one shot out of a playoff in his first and only PGA Tour event since becoming a pro.

With his top five finish at his most recent Web.com event, Johnson is one step closer to getting another chance at the PGA Tour.

While Johnson had spent much of the season around the 100 mark or lower, his recent string of three straight top 20 finishes has seen him soar up the rankings. His T2 this past week was good enough to jump him from 97th in the rankings all the way up to 51st, putting him just 26 spots away from that all important mark of 25.

With nine events left to play, Johnson sits $46,691 behind that magical spot, but several more solid top 20 finishes would give him a strong chance, and if he continues this strong trend, a couple more top 5 finishes or a win would assuredly put him firmly inside the top 25.

Johnson used rounds of 68, 71, 65 and 67 to grab his tie for second, using a strong six-under round on Saturday to really put himself in contention for a top 5 finish.

While Sam Ryder ran away with the tournament firing rounds of 67, 67, 62 and 67 to be one of just five players to shoot in the 60s in all four rounds, Johnson’s strong play over the weekend shooting rounds of 65 and 67 was almost equally as impressive.

He still has a long way to go to earn his PGA Tour card, but as I said a couple of weeks ago, Johnson is playing the best golf of his professional career and is well on his way to big things. The way he is playing, it would still come as no surprise if he picked up his first professional win before the season ends.