COLUMBIANA – Many members of the Columbiana community have expressed their grief at the passing of Shelby County High School Media Specialist Steve Latham. 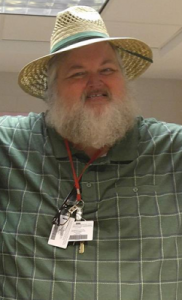 According to SCHS Principal Barbara Snyder, Latham passed away on Sunday, July 23, shortly after he retired in June. Snyder said he had worked at SCHS for 22 years. Before his years at SCHS, Latham worked at schools in Vincent and Montevallo.

“He will be sorely missed,” Snyder said. “We were already trying to adjust to him not being at school with us. We never imagined him not being on this earth.”

Snyder said she remembers Latham as selfless and caring, and expects his kindness to have a lasting impact on the community.

“He was an amazing man who cared about everyone else more than himself. He had a heart for the school and the kids in this community,” Snyder said. “I don’t think we can fathom the legacy he has left behind. It will leave a ripple on this school long after those who worked with him have gone.”

Fellow Media Specialist Mary Gayle Davidson said Latham was a mentor to faculty members and students during his years at SCHS. Because of Latham, Davidson said the school’s media center served as a safe place for countless students.

“Steve looked for the good in every student, and he found it. There was not a student that he didn’t love unconditionally,” Davidson said. “Steve was a misfit growing up, so our media center became a haven for the misfits. I’ve heard from hundreds of students that the library was a safe place for them during their years in high school.”

“He had a presence about him that was hard to explain. He was a gentle man that anyone felt comfortable approaching. You could have a conversation with him about any subject and he would get just as animated if he were talking with a fellow teacher about normal business or a sixth grader about what book they should read next,” Wray wrote in a blog post.

At the time of his death, Latham was a Montevallo resident. He is survived by his brother, Aubrey Latham, and sister-in-law Patricia Latham.

A memorial service for Latham will be held from 4:30 to 6:30 p.m. at the SCHS media center on Thursday, July 27. Davidson said everyone is invited to attend.

“He was absolutely the most wonderful man, mentor and educator,” Davidson said. “He was kind, gentle and loving, and he exuded that in life.”