CALERA – A Columbiana man was arrested Monday, July 24, in connection to the deadly hit-and-run accident in Calera on July 14. 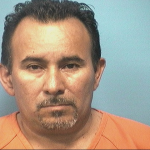 According to a press release from the Calera Police Department, officers were dispatched to a hit-and-run on Shelby County 25 between Calera and Columbiana. Two people were struck by a vehicle as they attempted to push a motorcycle out of the road.

Tatum died on scene and his son was transported to the hospital with injuries. The vehicle that struck Tatum and his son did not stop and left the scene of the accident.

Calera Police Chief Sean Lemley said the suspected vehicle that hit the men was located a couple of days after the accident. After locating the vehicle, police identified its owner and proceeded to obtain search warrants.

Police secured an arrest warrant for Guevara for the Class C felony charge of leaving the scene of an accident with a death or injury. Lemley said Guevara turned himself in to police after finding out there was a warrant out for his arrest.