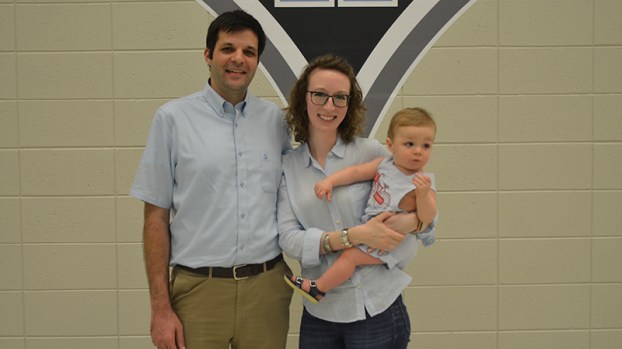 HELENA–The Helena High School cafeteria was filled with players, parents, faculty and more as those associated with the HHS soccer program participated in a meet-and-greet with the new boys head varsity soccer coach at a formal introduction on Monday, July 24.

Klark Sammis was hired by Helena High School in June and will take over the boys varsity soccer program, which has already had plenty of success since the program began in 2015.

Sammis, along with his wife Mary Elizabeth and son Michael, introduced themselves to players, parents and faculty members as he prepares to take over a soccer program entering its fourth year of existence.

Sammis comes from Alonso High School in Tampa, Florida where he previously served as the boys varsity soccer coach for two seasons.

In his first year, he led the program to a successful season where they suffered just two losses. Sammis is also credited for helping develop half a dozen players that have moved on to play college soccer, including two at the division one level.

Sammis grew up in Gainesville, Florida and said he has been playing, watching and around the game of soccer in general since the age of five.

Sammis and his family wanted to move to Birmingham to be closer to family and the tight-knit feel of the Helena community is what caught Sammis’ attention.

“What brought us to the Birmingham area in general was my wife’s family who is up here,” Sammis said. “Just looking around at different schools in the area, it really seemed like Helena was a tight-knit community and has a lot of support from the community, which is something my wife and I really looked for. It seemed like the high school programs in the area are growing and getting better and it seemed like an opportunity and a place to get in and really develop a strong program.”

Helena High School Athletic Director Chris Laatsch said the search for a new coach began at the end of spring or early summer and he, along with other members of the HHS administration were impressed by what Sammis could potentially bring to the school.

“He knows the game very well and we really think he’s going to be a good one for us,” Laatsch said.

Sammis explained some of the goals he wants to accomplish.

“I know they’ve been successful in the past and I just hope to continue that,” Sammis said. “One of my biggest things as a coach is building a team bond and making it a tight-knit group of players who can rely on each other on and off the field. After that, obviously it’s to win the area and try to make it to the Final Four as soon as possible. Also, I plan to work with the middle school down the street and work with junior varsity and getting kids to buy in to what we’re doing here at a younger age.”

Along with coaching, Sammis will also serve as a ninth grade world history teacher.