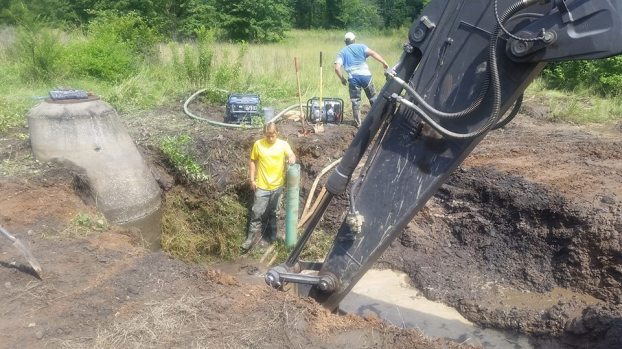 Jowers said the leak should be repaired by the end of today, Tuesday, July 25. The leak was located within about 300 acres of land near Interstate 65 and the railroad.

“We found water running where it shouldn’t have been running and followed it to the leak,” Jowers said.

Jowers said the number of residents affected by the leak is unknown right now because the incident report is not complete yet.

The leak was discovered at about 4 a.m. The city’s SCADA alarm system notified the water well operator that the tank on Shelby County 52, which can hold up to a million gallons of water, was losing water at a fast rate.

Jowers said it was difficult for crews to locate the leak in the dark. It wasn’t found until daybreak.

“It’s just one of those things that happen,” he said. “Some bolts corroded on a valve and the bolts snapped and caused the valve to blow open. There were still three bolts holding the valve on.”

Crews turned off the valve nearest to the leak and pushed water to areas of the pipe where the valve had been turned off.

Water services were restored to residents by Monday afternoon.