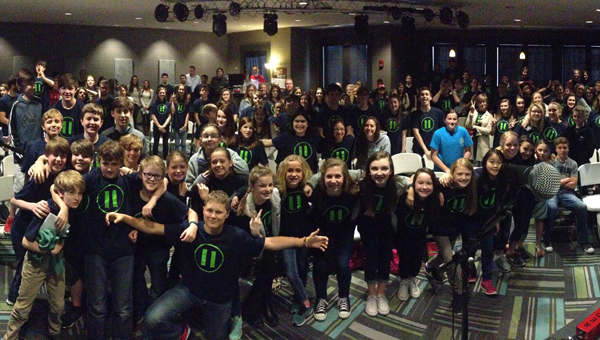 The Double Oak Community Church youth group, shown at Disciple Now, has participated in several activities over the summer. (CONTRIBUTED)

A mission trip to Atlanta in late June might be the most significant effort undertaken by the youth group, but they have participated in many other events.

Brian Marbury, student pastor at Double Oak, said the church partnered with Whirlwind Missions for the mission trip, which included a tour of the International Village and time spent learning about different cultures for about 25 youth group members who participated.

The youth, which range from sixth through 12th graders, led Bible Clubs in various neighborhoods each day of the trip.

“Groups come from all around the South and across the country,” Marbury said. “[Whirlwind Missions] organizes everything for us. We show up, and we have some things to prepare on our end like Bible stories and crafts. We all work together to make it happen.”

The youth group numbers about 150 students.

Double Oak Community Church, which is located in Mt Laurel, sponsored several other mission trips that have included youth group members, such as trips to Mexico, a Native American reservation in Mississippi, Romania and India.

“We’re proud of our students,” Marbury said. “They’re going all over the place. It’s been really crazy to see.”

Students served as interns during the WinShape Camp that was hosted at the church the week of July 17 and included 357 campers, and 40-50 teens helped with the church’s Vacation Bible School that had participation from more than 500 children.

“We want to make sure we give opportunities to lead and serve—help develop future leaders,” said Marbury, a Baton Rouge, Louisiana native who has served as the church’s student pastor since 2014.

Other fun activities this summer have included kickball, bowling, Frisbee, taking in a movie, a day at Treetop Family Adventure, attending a Birmingham Barons game, visiting High Point Climbing and a “Nerd Night” with board games and pizza.

“The summer is focused on just hanging out with students and doing fun things,” Marbury said.