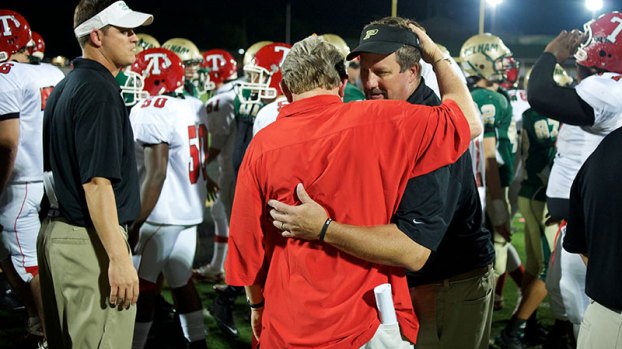 ALABASTER – The former head coach of the Pelham High School football team will be coaching the Thompson High School ninth-grade football team and will be assisting the school’s varsity program after he was hired as a teacher at the school during a recent Alabaster Board of Education meeting.

During its July 19 meeting, the School Board voted to hire Brett Burnett to a teaching position at THS effective immediately.

“He will be coaching the ninth-grade football team, and he’s going to help us out some with varsity,” said THS head football coach Mark Freeman. “He’s actually been volunteering with us for the past two years, mainly with the ninth-grade team. He’s got a lot of experience, and that’s what we need up here right now.”

Burnett served as the head coach of the Pelham Panthers for 10 seasons from 2005-2014, and compiled an overall record of 53-55 at the school. Burnett was terminated as the Panthers’ head coach at the end of the 2014 season.

While at Pelham, Burnett served as the head coach of the Warriors’ biggest gridiron rival, and beat Thompson in eight of his 10 seasons with the Panthers, including five straight from 2008-2012. The Warriors currently own a two-game win streak over the Panthers.

The two schools were in the same classification and division for the majority of Burnett’s tenure with the Panthers until Pelham’s split with Helena High School in 2014 halved the PHS enrollment, preventing the school from climbing to the 7A ranks with Thompson.