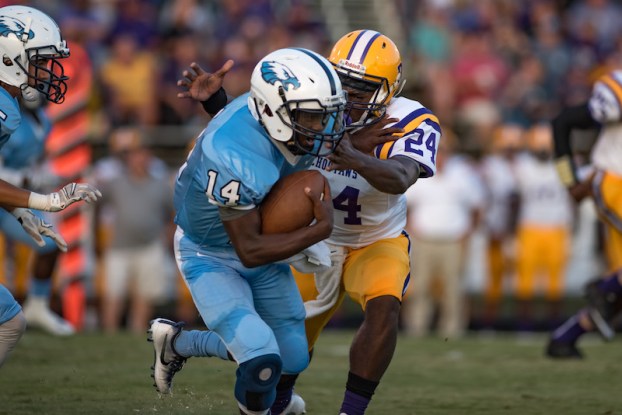 Jermaine Ross will return to the Calera football team as one of the top playmakers and will also be joining the team at Meet the Eagles day on Aug. 12. (File)

Meet the Eagles scheduled for Aug. 12

CALERA – It’s an exciting time as the buzz of the school year transcends talk around the county meaning football is on the near horizon again.

The Calera Eagles seem to be one of the favorites to win their region and before they take the field on Aug. 25 at home against Mae Jemison, the city will be able to celebrate the team and get excited along with them at the Meet the Eagles event scheduled for Saturday, Aug. 12 at 3 p.m. at the Eagles’ football stadium located at Oliver Park next to the high school.

Admission to the event will be free and plenty of family fun will be involved as clothing vendors, local vendors, a game truck and many different games will be available for all in attendance.

It also gives kids a chance to meet the football team and parents a chance to celebrate their athletes before the season kicks off.

In summer 7-on-7 football action, the Eagles have looked the part of a great team with Cornelius Brown leading the way at quarterback.

Former Alabama quarterback and Calera head coach Andrew Zow made a splash in his first season with the team propelling them to an 8-4 record and an appearance in the second round of the playoffs, which has created a lot of buzz around town heading into the 2017 season.

With all of that excitement surrounding the program, a big turnout is expected as the town basically hosts a big pep rally two weeks before the season gets underway.

The event is being put on by the booster club and not meant as a fundraising event, but more to enjoy the company of a great high school football town since admission will be free to all coming out.

By ALEC ETHEREDGE | Sports Editor Friday, Nov. 25, is a day that resonates in the minds of the Briarwood... read more