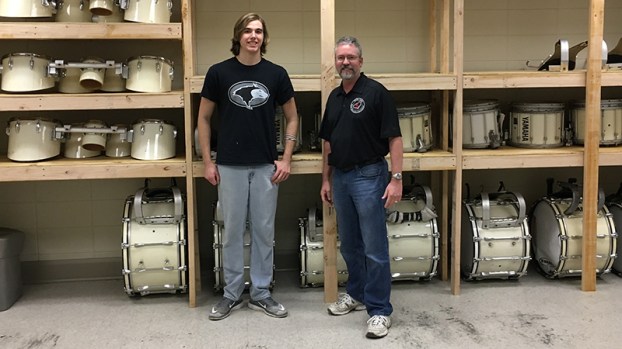 Chad Rohrbach’s passion for music began in the sixth grade and during his years at Pelham and Helena High School he became heavily involved in the band programs.

Rohrbach was the section leader of the trombones for four years, starting at Pelham High School in the ninth grade. In addition to tenor and bass trombone, he also played bass guitar and has performed with the marching band for five years. Rohrbach has also performed with the wind ensemble, jazz band and symphonic bands.

“I got into the middle school band program and then I kind of realized, ‘Hey I really like doing this and I’m really good at it,’ but I won’t say it was a natural talent because I practiced my butt off,” Rohrbach said. “Since then, every part of my life has pretty much included music. That’s what I’m going to be spending most of my time in college doing.”

Because of his passion for music, Rohrbach needed to complete a community service project in order to receive his Eagle Scout rank and unsurprisingly, he chose to make improvements to the Helena Middle School band lockers.

“I remember when I went to the middle school they had a lot of storage issues and it just wasn’t very clean in general,” Rohrbach said. “When I was looking for my project, one of my percussionist friends was talking about how the band director Mr. (Lance) Pruitt needed something done at the middle school. It just seemed like a better project than building benches.”

In all, Rohrbach helped construct 16 lockers that will store both large and small instruments as well as extra storage space on the top of the lockers.

The project took about a month to finish, and now that Rohrbach has earned his Eagle Scout rank, he joins the approximately 4 percent of Boy Scouts nationwide who have earned the honor.

“An Eagle Scout rank is basically the end-all goal in scouting,” Rohrbach said. “It’s basically what you’ve been working for the whole time, it means that you’ve lived by the scout oath and law however long you’ve been doing it and you’re vowing to do that for the rest of your life. It also includes just vowing to be prepared and to do the right thing and to help people when you know they need help and always try to make the right decision.”

In the fall, Rohrbach will attend UAB as a recipient of the Presidential Recognition Scholarship and Music where he plans to major in biomedical sciences and at the same time will be involved with the marching band, pep band and the concert band. Once he completes his undergraduate studies, he said he plans to go to medical school in hopes of one day becoming an orthopedic surgeon.

“Being at Pelham High School helped a lot because it was so overcrowded and it basically forced you to make friends,” Rohrbach said. “I got to meet a lot of new people and I’m going to have a lot more friends when I go off to college. Then the three years at Helena I did a lot of college prep classes my final year and I think that’s prepared me more than anything.”