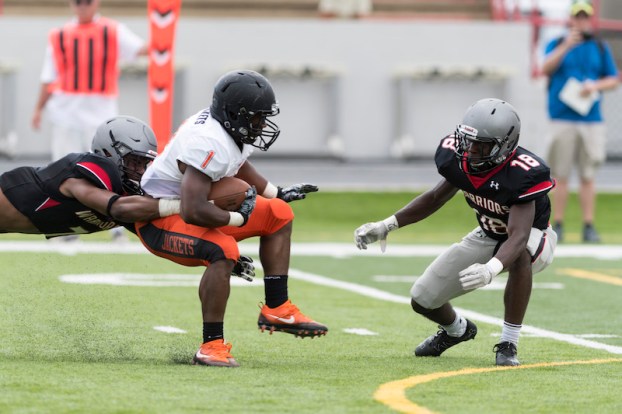 KJ Robertson, left, announced via his personal Twitter page that he had committed to Troy University to continue his football career after his senior season at Thompson. (File)

K.J. Robertson has had the dream of playing college football before he was even in grade school, and now that dream will become a reality in 2018 as the rising senior linebacker for the Thompson Warriors will be headed to Troy University to continue a strong playing career.

While it is just a verbal commitment for the time being, Robertson expects to make it official by signing on the dotted line later in the school year once signing day rolls around.

“It’s just such a family atmosphere at Troy,” Robertson said. “All of the coaches were amazing and I got to hang out with some of the players and they were amazing too.

“They not only gave me the best opportunity to play, but I really liked their school campus and got to meet a lot of the teachers who all seemed like great people, so I just felt like it was the best fit for me.”

For now, Robertson and his Thompson teammates are looking forward to a 2017 season that many believe might be one of their best football teams in a long time that could compete for a state championship.

It’s something that has Robertson extremely excited for his senior year in Alabaster having played significant time since his freshman year in 2014.

That 2014 season wasn’t the greatest as the Warriors finished the season 0-10, but they have made improvements each of the succeeding seasons going 5-5 in both and improving their defense tremendously.

“He’s just so fast with quick feet and can play both inside or outside with one of the best edge games I’ve ever seen,” teammate and fellow linebacker Jalen Rayam said.

Robertson’s love for the game started thanks to his dad, who was a former coach at the University of Illinois. As a young boy, Robertson was around the college game constantly thanks to his father, which instantly sparked his interest in playing the game he saw his dad loved so much.

“I was always up there with him and the energy of the college game always interested me the most, which is why I initially got into the game,” Robertson said. “It really gave me an insight on what the game is really like and that level of intensity that goes along with it.”

Now, Robertson won’t be watching from the sidelines or the stands as his dad coaches, but instead he’ll be on the field performing while his dad looks on from the stands cheering on his son with pride.