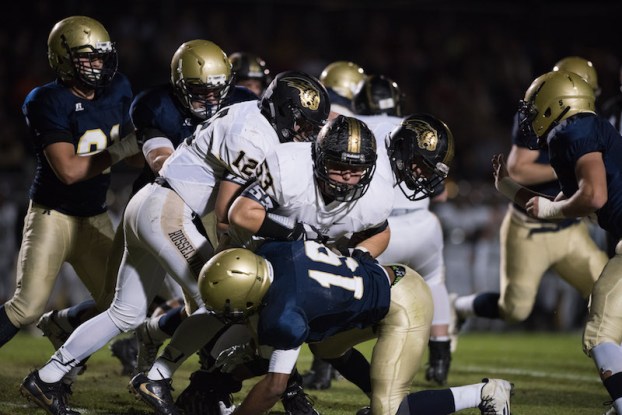 Gabe Russell will return as Briarwood’s leading tackler from last year along with second leading tackler Mark Hand as they look to improve on a defense that only gave up 12.7 points per game last year. (File)

Friday, Nov. 25, is a day that resonates in the minds of the Briarwood football team. That’s the day the Lions lost to Wenonah 14-8 in the semifinals of the 2016 AHSAA 5A state playoffs to see their strong run at a state championship appearance end by a mere six points.

While head coach Fred Yancey, who is going into his 28th season at the helm of the football program, has said several times the heartbreaking defeat to the Dragons has already been forgotten and isn’t on their minds, heartbreak is something that takes a lot of time to get over and with it being less than a year since the loss, it has to still be fueling the Lions to want to get back and redeem themselves.

While there is already a lit fire with several top playmakers back on this year’s 2017 squad, that little bit of extra fuel is something that makes this team one of the most dangerous in the 5A classification.

Briarwood will be thrown into the fire from their first game of the season as Chelsea travels just a few miles down the road to Lions Pride Stadium on Friday, Sept. 1 to kick off the 2017 season. It’s a rematch of a game the Lions let slip away from them last year as Chelsea used the home field advantage to grab a convincing 43-15 win.

After that opening loss, Briarwood went on to reel off 12 consecutive wins before that tough semifinal loss.

Plenty of athletes on that team are back and recall their only two losses of the 2016 season, which has them not only ready to redeem those two games, but finish perfect in area play yet again.

When you take a glance at the roster, the Lions have a playmaker back at almost every position, with just a couple of question marks impending.

One of those question mark positions on paper will be at quarterback as Michael Hiers steps into the starting role to take over for William Gray. During his senior campaign, Gray went 116-178 with 1,650 yards and 22 touchdowns through the air and ran for an additional 689 yards and 12 touchdowns on the ground.

That’s a production that is almost irreplaceable, but Hiers was actually pushing Gray for the starting job going into last season and even early in the season, which gives the coaching staff a load of confidence. He is a nimble guy that can escape pressure when needed, but his arm is what has the team really excited.

Helping Hiers feel more comfortable as he settles into the starting quarterback role will be the return of junior running back J.R. Tran-Reno. A season ago, Tran-Reno ran for 984 yards and five touchdowns on 155 attempts and also caught 19 balls for 255 yards and three touchdowns. He is the most dangerous athlete not just on this team, but normally on the field in every game.

Another offensive weapon that will help take pressure off Hiers and Tran-Reno is the return of leading receiver Carson Eddy. Eddy grabbed 33 catches for 471 yards and six touchdowns as a junior. They do however lose Luke Miskelley and three-year starter Kolby Kwarcinski, both of whom were second and third on the team in receiving last year, which leaves a big gap and makes the receiving corps Yancey’s biggest concern heading into fall practice.

Moving from one of the biggest concerns to one of the strongest units on the team, the offensive line has the coaching staff excited and for good reason. Garrett Bell, Trent Howard, Cole Scordino, Landon Berg and William Heidepriem will be the starters and there is one characteristic that makes them scary.

Four of those five linemen weigh in at least 240 pounds and three of the five stand at 6-foot-2 or taller with Bell, the left tackle, leading the way at 6-foot-5, 245 pounds. Trent Howard is just a sophomore but isn’t far behind at 6-foot-3, 250 pounds, which has Yancey excited to see what he can become with reps.

Switching over to the defense, Champ Stewart and Jordan Harmon are both gone off the defensive line taking a combined 163 tackles, 18 sacks and 26 tackles for loss with them, which leaves a gap on each end of the line for Yancey.

Carson Kolb will be one of those guys looking to replace that production on the end, while Joseph Munganast and Jacob Hawk, both seniors, will also get playing time. Patrick Blythe and Dalton Brooks will handle the nose guard and 3-tech position, respectively, as the Lions’ two best linemen.

Despite the defensive line being the second worry spot Yancey mentioned, backing them up will be one of the strongest linebacking duos in the country, which should lower his stress slightly.

Senior Gabe Russell and junior Mark Hand both return to their starting roles in the middle of the defense as the top two tacklers off of last year’s team. Russell, as a junior, led the team in tackles with 143, while Hand as a sophomore added an additional 132 tackles giving them a combined 275 tackles between the two.

Those two back for a defense that gave up just 12.7 points per game in 2016, is why this team has a chance to be scary to any opponent that tries to move the ball down field. Sam Hamner, a starter on the baseball team, as well as Brandon Kassoup will also play a significant role.

As if there wasn’t enough support in the middle of the defense, Carson Donnelley is back as a three-year starter at the safety position. He added 75 tackles to last year’s squad and led the team with 10 pass break-ups and five interceptions, which was second in the county.

Also helping out in the secondary will be an array of guys with experience as Jonathan Hill, Hudson Hartsfield and Andrew Sherrod have all started at some point in their career giving Yancey valuable experience in the secondary. Cade Dickinson and Cade Mango will also add some depth.

Special teams will be another strength of the Lions as Noah Nall will handle field goal and PAT attempts during his junior season, while Hiers or Tran-Reno will handle punting duties. The return game, however, is the most exciting part as Tran-Reno and Eddy will handle that aspect of the unit and both are more than capable of taking it to the house any given play.

Since looking over coach Yancey’s nominations for the All-County team last December, I have been the leader of the Briarwood hype train realizing how much they were bringing back on one of the state’s best defenses.

While there are some question marks up front on defense, what stands behind them at the linebacking and secondary corps is unreal and will keep gains minimal even if the defensive line struggles at times.

The defense alone would be enough to give this team a strong chance at a state championship, but returning key players on offense is just an added bonus. Tran-Reno back in the backfield is the ultimate key and while there is concern at the receiver position, Eddy will be enough of a playmaker to help create open opportunities for others as well.

Hiers might be stepping into his first year as the starter, but the offensive line that will be protecting him and the weapons surrounding him at skill positions will make life so much easier for him.

As long as they stay healthy, with the balance on both sides of the ball, my bold prediction is that this team will repeat as Class 5A Region 5 champs and find themselves in the state championship game come November.

By ALEC ETHEREDGE | Sports Editor K.J. Robertson has had the dream of playing college football before he was even... read more