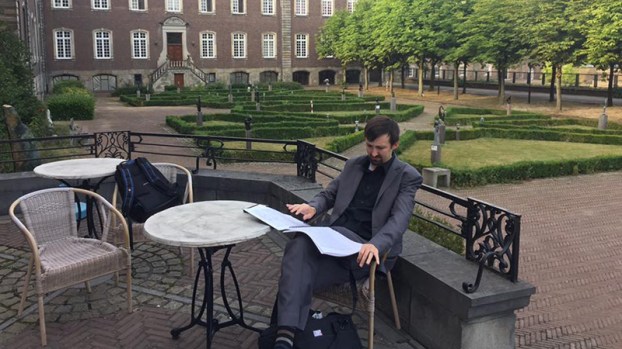 Thompson High School band director Justin White reads over music as he prepares to take the podium at the World Music Competition in the Netherlands. (Contributed)

Justin White attended a conducting competition and course held at the University of North Texas June 12-25.

The competition was a regional site for the World Music Competition, an event similar to the Olympics, held every four years in Kerkrade, Netherlands.

The event lasts the entire month of July and consists of marching bands, concert bands, and conducting compositions.

White was selected one of the winners at the regional competition and represented the USA, Canada, and Mexico in the finals portion held in the Netherlands.

There were 18 conductors that made the finals with more than 100 applicants for the combined sites, according to White.

“As my prize, I received my trip to Kerkrade, Netherlands with all expenses paid,” White said. “I spent July 11-15 there and went to classes and was coached by famous conductors. Each day I conducted ensembles such as the Europeans Union Youth Wind Orchestra, Hungarian Wind Ensemble, and Lower Birmingham Youth Wind Orchestra. I also attended concerts for the bands that were competing.”

The Netherlands event has 260 participating bands, from more than 30 different countries, separated over five continents, and is described by the organization as “record-breaking.”

“The experience was enlightening to how much music is universal in all the different cultures,” White said. “It was a great learning experience for me to rehearse groups that do not speak English to really use my gestures to communicate. This was my first trip to Europe, and I just really wanted to soak it all up and bring back as much as I could to help our students enjoy and understand music.”

The event attracts more than 20,000 musicians and 350,000 visitors to Kerkrade and its surroundings, according to the WMC’s website.

White said he thanks his colleagues in the Thompson band staff for helping to pull his extra “weight” while he was in the Netherlands.

“My wonderful wife helped me tremendously as well, and my family was also very supportive,” White said.