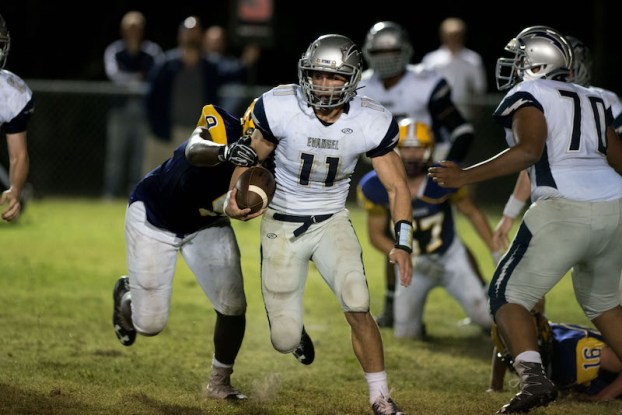 Evangel will have to replace quarterback Micah Murphy who accounted for 3,193 all-purpose yards and 19 touchdowns in 2016. (File)

The reality is really starting to sink in that football season is just around the corner, as we are just two-and-a-half weeks from both the ACSC and AISA schools kicking off their 2017 seasons on Friday, Aug. 18.

We are in the midst of taking a look at all of our football teams for the upcoming season in our annual way-too-early football predictions, and while we have done several AHSAA schools already, it’s now time to take a look at our two ACSC teams.

Both Evangel Christian in Alabaster and Hope Christian in Pelham are part of the eight-man football league and both are looking to accomplish different things under new leadership.

Evangel will feel the departure of senior Micah Murphy, who was one of the state’s best performers in 2016, throwing for 1,279 with 19 touchdowns and rushing for another 1,914 yards.

His strong leadership and great athletic ability led the Lightning to the 2016 ACSC State Championship and an appearance in the NACA National Championship in which they lost a tough game.

With the departure of Micah Murphy also comes the end of the Don Murphy era, who helped transition this program into one of the strongest powerhouse ACSC football programs not just in the state but the country as well.

Taking over for him will be none other than Tim Smith, who has spent the last 20 years at Cornerstone Christian School in Columbiana and been one of the best coaches around the area.

With him leading the way and an unbelievable amount of talent back besides Murphy and running back Brad Baggett, this team should be the favorite to win the ACSC yet again.

Right now there is a battle for who will replace the All-Star quarterback as Tyler Henderson, a Kingwood transfer, and Camden Smith look to get the job.

Last season at Kingwood, Henderson threw for 1,937 yards while completing 135 of 249 yards as a freshman, which might give him an upper hand. Coach Smith remains adamant that Kamden Smith is pushing hard for the starting job as well.

What coaches are most excited about, however, is Tyler Henderson’s brother and wide receiver Colby Henderson, who has been described as the “real deal” by several different coaches.

The linebacker position alone is enough to win games for this team in 2017 as they transition from a 3-4 defense over to a 4-3 defense under their new head coach.

Returning to the unit will be senior John Lloyd, who led the team last season with 126 tackles. He is a guy the coaching staff feels like could be one of the best linebackers in the state at any level of competition. Transfer Theo Mangoes, who made the trek from Cornerstone with his coach, as well as transfer Hunter green and returnees Chase Callahan, Davis Windsor and Wyatt Rickles, will also help out at the position making it their most talented unit on the team.

The secondary will also be full of talent as seniors Zachery Windsor and Luke Baylis as well as junior Nat Arvizu all have great speed and a certain athleticism that will help them lock down that position as returnees.

While there is a lot to replace offensively for the Lightning in 2017, the talent that is taking the field will still be the cream of the crop in the ACSC. What really helps this team out is that it also plays several games outside of its eight-man schedule giving it valuable experience in 11-on-11 action.

That difficulty helps when it comes to the playoffs and you are playing the best eight-man teams in the state, giving Evangel an added depth the rest of the teams seem to struggle with.

Led by its linebacking unit and the simple fact that it has lost just four games in the last four years, there is no way a coach like Smith is going to come in and let this team down. Evangel will be and should be the favorite to repeat as ACSC champions in 2017.

Hope Christian is also in the midst of a change as the tragic passing of head coach Tony Nafe in the offseason. Nafe transcended the Eagles’ program taking it to a level it might not have reached without him.

While his legacy and spirit will live on and fly with the Eagles every week; Matt Davis, who is also an orthopedic surgeon, will take over as the new head coach in 2017.

Hope, like Evangel, will lose a lot of offensive production heading into the new season as they look to replace a top quarterback, receiver and running back.

The departure of senior athlete Juan Cuellar will by far be the biggest blow to this team as he was a player that could move all over the field and do just about anything the coaching staff needed him to.

Being in an option attack offense, Cuellar a lot of times was looked upon as the quarterback and running back taking command of the offense.

While Cuellar will be a big loss there are a lot of promising playmakers on the rise starting with Jackson Davis who looks to be the leader at the quarterback position and while they have been running the option attack, coach Davis says his new quarterback’s arm and athleticism may change that up a little bit.

What will help Hope is the emergence of five different running backs, all of who are extremely talented. Peyton Long and Ethan Key are two powerful guys that will be joined by speedsters Tyler Hubbard, Britton Boggan and Sam Brechin, all of which have experience on the team.

Colton Smith seems to be the leading option at receiver. As a member of the defensive and offensive line last year, Smith has gotten more athletic, and with his size and athleticism he is a great option at the tight end position.

The defensive side of the ball will feature almost all of the same guys who will be playing offensively as well. The linebacker unity, like Evangel, may be the strongest aspect of this team thanks to those big guys like Key and Long, who bring a strong and powerful approach to the table.

This team has many unknowns right now, but a lot of upperclassmen who know what to expect and how to turn this team’s recent struggles into success. They have been very young the last couple of years, but finally have a group with experience that will help the transition into a new era.

What goes against this team is the amount of offensive production it has to replace as well as a new coach. While it may be a .500 kind of year for the Eagles, they’ll be in the playoffs where anything can happen.

Meet the Eagles scheduled for Aug. 12

FROM STAFF REPORTS CALERA – It’s an exciting time as the buzz of the school year transcends talk around the... read more