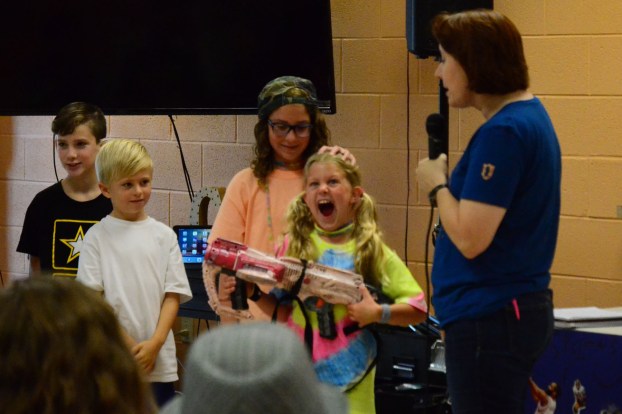 Kids and teens in the Chelsea community showcased their filmmaking skills at the second annual A Minor Film Festival at the Chelsea Community Center on Saturday, July 29.

CHELSEA – Kids and teens in the Chelsea community showcased their filmmaking skills at the second annual A Minor Film Festival at the Chelsea Community Center on Saturday, July 29.

A Minor Film School organizer Rachel Ivey said students learned about filmmaking, storyboarding and editing by taking seven weeks of classes throughout the summer. According to Ivey, the entire process was done via mobile device.

Students in her advanced filmmaking class created the short film, “Alien Ducks,” which was screened at the festival for family and friends.

According to Ivey, “Alien Ducks” follows the story of 8-year-old Vivian, who is tasked with saving the world from an invasion of rubber ducks from outer space. Ivey said the idea for “Alien Ducks” came from a trailer that was submitted to last year’s film festival by seventh grader Betsy Samuelson.

“The kids did great. We finished a project in seven weeks and that’s amazing,” Ivey said. “It was a positive experience that’s given them a new perspective on making films.”

Throughout the filming and editing process, Ivey said the cast and crew of “Alien Ducks” faced a lot of challenges and had to find creative ways to overcome them.

“There was not a single thing about the project that went smoothly,” Ivey said.

“Alien Ducks” was co-directed by Samuelson and fellow seventh grader Palmer Sexton, who both aspire to be film directors when they grow up. They said their favorite parts of directing “Alien Ducks” were being able to use a megaphone and clapboard.

“They are two of my most hardcore students,” Ivey said.

Ivey said members of the crew often took on different roles throughout the filmmaking process and learned about different aspects of producing a film.

“The crew is fabulous. The bulk of them have been coming to the monthly classes since January. They’ve developed a real passion for filmmaking,” Ivey said.

The cast of “Alien Ducks” consisted of many locals from the Chelsea area, and starred 8-year-old Claire Jackson and 13-year-old Nate Frey.

Jackson, who previously played the role of Gretel in the Chelsea High School production of “The Sound of Music,” said she had fun acting in “Alien Ducks” and wants to be a professional actor.

“I liked being a kid superhero. I liked acting and being the star,” Jackson said.

Students in the beginner’s class made movie trailers to be viewed and voted on by a panel of judges and the audience.

A Minor Film School Classes will resume in September and will take place on every second Saturday of each month at 9 a.m. at the Chelsea Community Center. Ivey said A Minor Film School will be looking into several projects during the fall, including shooting promotional videos for the Chelsea COP and local nonprofits and businesses.

“I’m looking forward to working with all the kids and seeing what we come up with,” Ivey said.